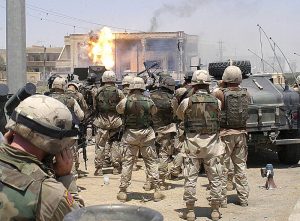 US soldiers during a raid in Iraq. Photo credit: creative commons license from Wikipedia

Unfortunately as a trans person in this world, I am not surprised by the constant transphobia and oppression of us at just about every level of our lives. Instead, I am disgusted by the responses. I have spent hours and hours pouring through article after article, and across the board, the media and “progressive organizations” have taken this time to glorify and pinkwash* the military, violent masculinity, and murder. All in the name of “supporting trans people!” And I call bullshit.

There’s so much to say, I almost don’t know where to begin.

First off, this is so much of a distraction, it is insulting. The sheer amount of news about the trans ban is outrageous. To be clear, the trans ban in the military was only lifted a year ago by the Obama administration. But these articles, which mostly focus on trans men in the military by the way and totally ignore the realities for nonbinary people in the military, make it sound like trans people have been able to live free of oppression in the military and Trump is taking that away.

There were a few responses that were on point like from No Justice No Pride and L’lerrét Jazelle Ailith’s article THE MILITARY IS AN IMPERIALIST TOOL, BUT THE BAN ON TRANS FOLKS IS DEHUMANIZING AS FUCK. In it, she writes,

“But the President’s tweets from this morning are also a distraction. They are a distraction from the multiplicity of ways that the system has failed to protect trans people. Especially Black and Brown trans folks. […] This year alone, over 15 of Black transgender women and femmes have been murdered and the government continually ignores this issue. I think about the thousands of trans folks who are poor and homeless without access to adequate education or job prospects. Those who are not protected in the streets are consistently targeted, harassed, and imprisoned—and now our focus has been once again shifted.”

Trans people, and disproportionately black trans women, are being murdered in the streets every other week. Meanwhile, our national media is looking at Trump’s tweets, and barely covering official policy changes like the Senate’s attempt to repeal the Affordable Care Act. Which, by the way, would single handedly impact almost all trans people in the United States (as L’lerrét Jazelle Ailith discusses in her article here). 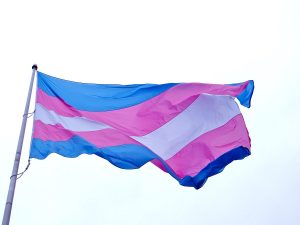 But even these discussions miss the larger point, which is why we as trans people are in the military in the first place and why our acceptance right now is being held up as our ability to join a terrorist organization—the US military.

So, why are so many trans people in the military? (FYI trans people are twice as likely to join the military.) We live in a world where trans folks have the highest rates of poverty and unemployment, especially for black and brown trans people. Many of us come face-to-face with total rejection from those closest to us resulting in extreme housing instability. The military is held up as one of the last remaining avenues where we can have some semblance of stability and camaraderie, but even that is mostly a facade as you can see in this pretty solid comic strip about the experiences of Jordan Blisk.

For us, it’s not only an “economic draft,” but I would say it is also a “social draft.” A last ditch effort to being accepted. This is extremely dangerous. Because of this, now some transgender people and many “left” organizations are holding up stories of trans people in the military as the pinnacle of supporting trans people. At the same time, they are sacrificing any more meaningful analysis of how the whole damn system is guilty as hell.

Yes trans people should have job protection, but also the military shouldn’t even exist as it currently does (or shouldn’t exist period, perhaps). Maybe we should spend less than the $1.45 trillion we put into the military every year, and we would be able to create more protections for trans people, and people in general. I don’t know, maybe provide guaranteed free housing for every single trans person in the country? (Which by the way would only cost $1 billion/year if we gave every trans person in the US $715 for rent every month.)

As L’lerrét Jazelle Ailith aptly warns in her article, “It is my fear is that the white LGBT+ infrastructure will mobilize around repealing this ban and use all resources and tactics to fight that one particular angle whilst ignoring the needs of the most marginalized and how this is connected to larger structures of dehumanization perpetuated by capitalism and white supremacy.”

Unfortunately, that is what is happening. Even worse, there is some serious pinkwashing happening of the US military—an organization that has illegally murdered over 20 million people in 37 countries since World War II and is the proud owner of a long list of war crimes. Personally, I don’t want our struggle as trans people to be used to praise the military or erase the genocides our country has committed.

And I don’t want our liberation as trans people to be determined by our ability to be a drone operator and murder people overseas as Eli Lake suggests in an article for Bloomberg. Lake writes,

“Imagine if Trump had leaned into the military’s recent policy instead of reversing it. Perhaps, with a little luck, a transgender special operations officer would be on the team that captures Abu-Bakr al-Baghdadi, the current leader of the Islamic State. Or maybe a transgender drone operator would be the one who fired the missile that rid the world of al Qaeda’s boss, Ayman al-Zawahiri. Think of the opportunities. The Pentagon could tweet the image of Baghdadi on his knees with his hands tied behind his back, or Zawahiri’s exploded compound, with just a simple hashtag: #lovewins.”

I don’t think I even need to discuss the disgusting irony here….

This is part of a long legacy where oppressed people have been asked to join oppressive institutions with the false promise of recognition and rights. Perhaps the most famous example of people resisting these false promises is the National Black Antiwar Antidraft Union that included the Black Panther Party and the Student Nonviolent Coordinating Committee. They encouraged young black men to refuse to go to Vietnam to fight for a country that wanted to kill them here at home. It was because of their organizing that Muhammad Ali said his famous quote, “I ain’t got no quarrel with them Viet Cong,” before he publicly refused the draft. Muhammad Ali’s words are as pertinent today as ever. (By the way, to read more about the life of Muhammad Ali and the dope organizing of Gwen Patton with the National Black Antiwar Antidraft Union, check out this great article.) 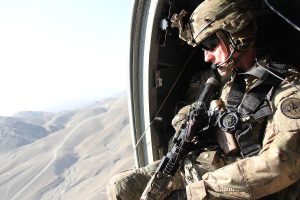 But why hasn’t there been a similar outpouring of support for Syrians and Iraqis? Where are the articles about trans people who are refusing to drop bombs as a bombardier because they don’t want their “great work” to be dropping the 24,287 bombs the US military dropped on Iraq and Syria in 2016 alone? Or any critique of how—for the most part—the trans people who can openly serve in the military are those who have the privilege to “pass” as cisgender? Or a discussion of how US destabilization of Iraq has led to queer and trans Iraqis having their lives be a living hell. What about honest national coverage of when men in the US military murder trans women in cold blood, simply because we are trans women? Both on duty and off duty.

The whitewashing and pinkwashing of the military that is happening right now in the media is a blatant (or maybe not so blatant since I don’t hear many people challenging it) attempt to glorify the military and our participation in violence. Our liberation as trans people will not come from the military. It will come from ending the horrible institutions that impoverish us, kill us, and ask us to kill others. Us trans folks need your support, but glorifying military violence is not the way to do it. So cut this bullshit now, and start organizing for some real change.

Sam Koplinka-Loehr is the field organizer with the National War Tax Resistance Coordinating Committee. She is a white, 25-year old, transwoman. She is a nanny, a parent, and an activist. She is currently involved with campaigns fighting police brutality and prison slavery. Past references to Sam in NWTRCC materials referred to Sam as “they/them” or “he/him.” Sam currently uses she/her pronouns.

*pinkwashing is when an organization highlights LGBTQ people in the organization while attempting to hide or distract from the horrible things that organization does. This uses us to cover up other injustices.

2 thoughts on “I Call Bullshit On The Trans Ban”