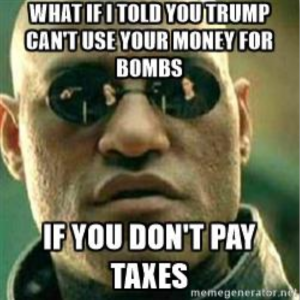 More people are starting to consider tax resistance against the Trump administration. And many don’t know at first that others are already refusing to pay war taxes! Today, we look back at an 2007 interview with other new resisters. This article was originally published in NWTRCC’s June/July 2007 newsletter.

A 21-year-old dance major and animal rights activist from Flagstaff, Arizona, and a 46-year-old bingo hall operator from Bismarck, North Dakota, might not seem to have much in common. But recently [in 2007] both of them began to refuse their Federal taxes as a protest to the war without knowing that anyone else in the country was doing the same.

Most people who become war tax resisters do so with the comfort of knowing there are thousands of others also resisting. However, very few – that we know of – start refusing unaware of any others. They are kind of like “war tax resisting orphans.” Perhaps their numbers are greater than we have imagined.

It takes courage to do something that most people would consider scary, such as standing up to the IRS. If we participate in an antiwar march, there’s a good chance the government will ignore us. Refuse your taxes and you invite the snarling wrath of the most heavily armed nation in history to pay a call.

So, why are some people able to openly defy the U.S. warmaking juggernaut with a damn-the-consequences attitude – thinking they’re alone – while most peace activists agonize whether to become war tax resisters or, more likely, continue to pay for a war with which they adamantly disagree? As an organizer trying to increase the number of war tax resisters, it would be useful to know if this courageous defiance of authority can be nurtured in or exported to others, or is it hopelessly genetic?

These refusers had no illusion that the government would be asleep at the switch. Rachel Feather (of Flagstaff) assumed she would be arrested and sent to jail. Brian Zelmer (of Bismarck) expected that the IRS would eventually levy his bank account, garnish his wages, or seize his property.

Brian was motivated to resist by “the lies upon lies that we were told about this war. … I saw how much they took for the year … and yet they needed to put the screws to me for a few hundred dollars more. … [O]ut here in ND there are not very many rallies to go to. This is the way to hit them where it counts. In the pocket book.”

Rachel: “I was raised to know the difference between right and wrong not based on what the government tells us to believe. … In one of my sociology classes, we were talking about homophobia and where it stems from. Most of our answers traced back to the government. We then started talking about the ‘Don’t Ask, Don’t Tell’ policy. I was angry when I left class. … I decided I wasn’t going to pay for something I disagreed with so strongly. … In my animal rights activism, I have learned that the best way to be heard is to withhold money.”

“This will be my second year of protesting war taxes … I thought I was the only one, but wow, I am not alone … Fear is used to control and manipulate people. I will never be controlled by fear again.”

Brian: “Growing up, I learned to stand up for myself and what I believe in. Even if I am the only one. I have done this most of my life. I have never been afraid to stand out differently. It really doesn’t bother me. I am a world history buff and the past shows us how great the world can be when people stand up for what is right. … On [Sept.11, 2001], the American dream died for me. … That day I decided that fear cannot ever again be part of the equation. Fear is used to control and manipulate people.”

Rachel had always been outspoken about an injustice, whether that be opposing a teacher, a school bully, or a boss; so “standing up to the government wasn’t that big of a step,” despite the consequences. “My friends and family might also say that they don’t want to start any trouble, while I think ‘trouble’ needs to be started.”

Beginning to resist is like losing weight -tough as it is to get started, sometimes it’s harder to sustain year after year. What helps keep them going?

For Rachel, the historical example of others who defied authorities, despite persecution – such as animal rights activists Jeremy Betham and Ronnie Lee, and suffragist Susan B. Anthony – is a major inspiration. Having supportive parents and thinking that her resistance might encourage others to do the same provides additional motivation.

Though his wife is “uneasy” about his tax resistance and his parents “think it’s stupid,” Brian has found inspiration in the music and lives of The Beatles who “showed that it was ok to be different and ok to take a stand, even if it feels like the whole world is against you. … Their actions and conduct were outspoken. Everything they did questioned the norm. From clothing to music to books to records, they pushed the limits.”

“I began not paying last year because of the war. I am so happy to find out … that there are others that feel the same way as I do. … Even with all of the consequences, I never have regretted standing up.”