I am a war tax resister because Henry David Thoreau convinced me to be one.

I was looking for medicine: something to help me ease my troubled conscience and to help me sleep better at night. I turned to Thoreau and instead of medicine, he gave me marching orders. This turned out to be the cure I needed after all. 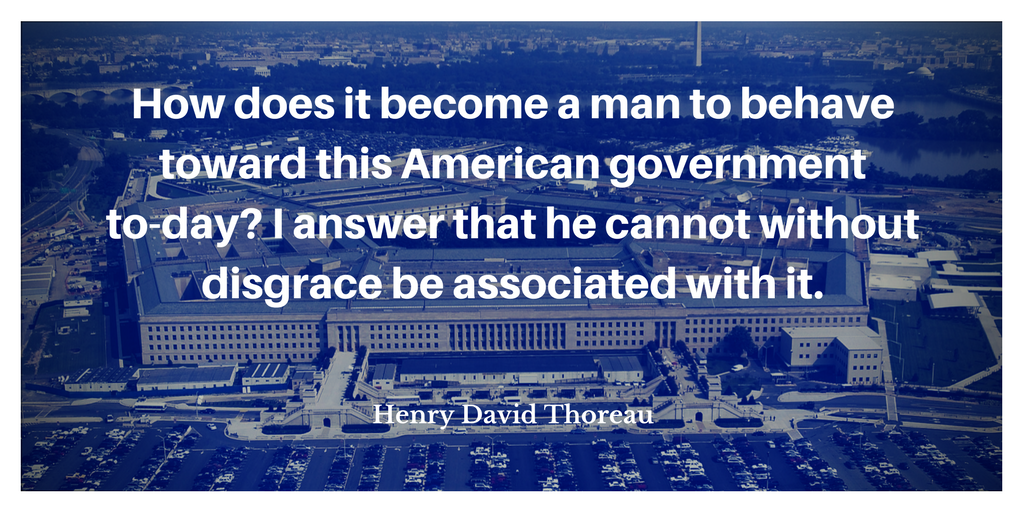 “Civil Disobedience” as being an argument for why people ought to have the right to disobey the law and its officials, when the reasons for doing so are good and noble. But the essay is actually more severe and challenging than that: Thoreau insists that you have the duty to disobey the law if the law commands what is wrong or forbids what is right.

I reread his essay in early 2003 as the invasion of Iraq was approaching, and his challenges took me by surprise. I too had misremembered Thoreau as making an abstract argument, and as pointing his finger at Them, not at me. I realized he was right. I stopped paying federal taxes.

I also began, like he had, to “quietly declare war with the State, after my fashion, though I will still make use and get what advantages of her I can, as is usual in such cases.” Thoreau’s statement at the time of the Fugitive Slave Act and the Mexican-American War — “How does it become a man to behave toward this American government to-day? I answer that he cannot without disgrace be associated with it” — is no less true now.

There are many types of war tax resistance, and many different sorts of arguments in its favor, but I remain comfortable calling myself a Thoreauvian, and have yet to find a better argument than the one that originally convinced me.

This piece was published in NWTRCC’s June/July 2017 newsletter, which also features reportbacks and reflections from Tax Day, news from the movement, legal notes on war tax resistance, and more.

Please send NWTRCC your thoughts (at nwtrcc at nwtrcc dot org) about “Thoreau today” or favorite quotes for use in this newsletter throughout the bicentennial year.

David Gross is the author/editor of a number of books including The Price Of Freedom: Political Philosophy From Thoreau’s Journals. His tax resistance blog “The Picket Line” is at sniggle.net/TPL.

I was moved by Dave Gross’s account of his encounter with Thoreau, of the influence Thoreau exercised on his becoming a war tax resister. I had a similar experience, found in Thoreau’s essay a similar power. I agree that Thoreau still matters.

Over the years, though, I’ve come to a fuller sense of what keeps Thoreau from mattering more. For one thing, “Civil Disobedience” is about being a man. I know that “man” in 19th-century was sometimes used to mean “man or woman,” but Thoreau’s use of the word feels distinctly masculine, and the virtues he associates with tax resistance feels stereotypically masculine as well: “Oh for a man who is a man, and, as my neighbor says, has a bone in his back which you cannot pass your hand through. . . . How many men are there to a square thousand miles in this country? Hardly one” (emphases in original).

For another, the essay is anti-democratic. We know from Thoreau’s other writings how contemptuous he was of people who didn’t by his standards live good lives. Among them were the Irish immigrants he describes, and of whom he says, in Walden, that “the culture of an Irishman is an enterprise to be undertaken with a sort of moral bog hoe.” “Civil Disobedience” states Thoreau’s elitist position more directly: “any man more right than his neighbors, constitutes a majority of one already.” The person who is “more right” can only be a majority of one if the neighbors’ votes aren’t counted. How does that square with democratic principles, in an age when it matters so much to people on the left that people get to vote and have their votes matter?

A colleague of mine once described Thoreau’s politics as being “to the right of Genghis Khan.” That doesn’t seem right either; but his politics were, I think, sexist and elitist, and in my view at any rate, to hold on to what remains powerful in him, we have to acknowledge what his limits were.

Lawrence Rosenwald is a Professor of English and of Peace and Justice Studies, Wellesley College.

One thought on “Thoreau’s work is still relevant”