Well, I am back in Philadelphia after a week in upstate New York. Whew! It was a lot of hours on the train and on the road! It was nice, though, to look out the window and see hills, rivers, and lakes. I love Philadelphia, but living in the city I forget the natural beauty of rural areas. When I travel it feels like I cross a threshold and am going into a different world altogether. 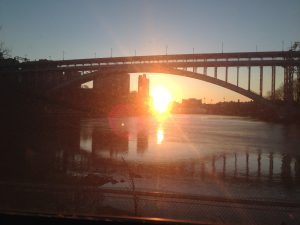 Over the course of the week, I led three presentations on war tax resistance and racial justice. There was one in Ithaca, Syracuse, and Rochester, NY. I also got to see some friends and family, which was an added bonus.

The idea for this trip started at the end of 2016 when Tom Joyce contacted me. Tom is a long-time war tax resister and organizer from Ithaca, NY. He wanted to have a gathering for war tax resisters in New York state, similar to the one that New England War Tax Resistance puts on every year.

We first discussed me coming to speak to the Ithaca Catholic Worker that Tom is a part of. After some talking, though, the idea quickly grew to include a series of presentations in three cities. We decided on two main goals. One of our goals was to highlight and support local organizing for racial justice. The other goal was to build a stronger base of people who refused taxes and redirected that money to organizers in their communities. We figured that after a series of presentations we would have enough people who were interested in making a regional gathering happen.

Some of my highlights from the week included:

Between all three workshops, people were most excited about the tax redirection effort this year, which is people refusing money to the federal government and redirecting those tax dollars to radical organizing that is led by Black, Brown, and Indigenous people. At each presentation, people decided to start a redirection effort in their area.

It also seemed like this organizing model makes sense. It worked well to have a few workshops in cities or towns that are relatively close to each other that are co-hosted by local activist groups, a regional organizer, and NWTRCC. The focus on getting more resource and support to local activists was critical. Now, regional organizers can build a network that wants to stay connected with projects like redirecting taxes and starting an annual gathering. So stay tuned for a gathering in upstate NY in the coming year!

Thanks to everyone who made this trip possible through hosting me, reserving the space for workshops, doing local outreach, presenting together, and so much more.

7 thoughts on “Organizing Region to Region: My Travels in Upstate New York”