The NWTRCC office tends to be a bit quiet at this time of year, but the phone rang early on a recent Friday morning, and a woman’s accented voice explained that some South Korean activists would like to visit the office to learn more about the work of National War Tax Resistance. I was thinking “next week” when she said, how about today? Ed Hedemann agreed to handle the meeting, and I listened in at times.

Our three visitors were in the U.S. representing the Peace Delegation of the newly formed People’s Democracy Party (PDP) in South Korea. They turned up carrying their signs from a vigil at the U.N. building where they were protesting Ban Ki-moon, who apparently has his eye on the South Korean Presidency as his UN Secretary General term ends. The PDP sees him as cut from the same cloth as the recently impeached president.

Finding NWTRCC on the internet, they were interested in learning about the history and techniques of war tax resistance in the U.S. because they are initiating a tax resistance campaign based on two primary demands: 1) the resignation of the recently impeached President Park Geun-hye, confiscation of all her property, and removal of her cabinet; and 2) the withdrawal of U.S. troops from South Korea.

The PDP, formed in November after the rally of 1 million in Seoul, focuses on economic issues such as education, housing, and medical needs. They aren’t so much interested in running people for office as they are in producing propaganda and making contact (international solidarity) with groups around the world, besides their tax resistance campaign. They maintain at least a one-person vigil every day at the U.S. embassy in Seoul demanding that all U.S. troops be withdrawn.

While the income tax (and a 10% VAT) is the government’s main source of revenue, it is very hard to resist because, as in many other countries, the tax is taken from salaries before individuals have a chance to see it. Consequently, the PDP’s tax resistance will focus on three other taxes that are vulnerable to resistance: 1) national pension tax (funded, in part, by 4.5% of an employee’s gross income), 2) medical insurance tax, and 3) the television tax. Already people are refusing those taxes because they simply can’t afford them. The PDP will take advantage of this to promote open refusal to pay until Park resigns and U.S. troops are withdrawn. 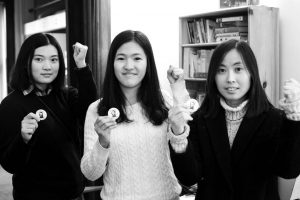 Our visitors were nearing the end of a month in the U.S., mostly in Washington, DC, where they had vigiled at the White House and Pentagon with mutual friends from the Catholic Worker in DC. (See a video by DCfred who interviewed them at the White House.) We found we had many interests in common in the struggle against militarism and for people-powered democracy. We exchanged buttons and newsletters and hope to stay in touch.

4 thoughts on “South Korea to the U.S. — Sharing Tactics”