Home ownership might seem like a mundane topic while confronted with the latest news headlines, but most of us in war tax resistance see life choices as inextricably linked to global issues, so let’s see where this goes.

I saw the movie The Big Short a while ago. I totally don’t understand what those guys where buying and selling or how you can make money off debt, but clearly it worked for some and didn’t for others. Mostly what it made me think about, and what the whole housing crisis of a few years ago made me think about, is this drive to want to own a home. It’s so linked to the American Dream that people don’t always think of it as a choice, more like an expectation and a right.

As a war tax resistance counselor I am still surprised when one of the first questions is “What if I want to buy a house?” Sometimes it is hard to find the right words to say that you can’t change the world for the better and have everything promised by that American Dream too. (I don’t want to sound too pure though; it’s probably the subtle propaganda of the American Dream that surrounds me with stuff and comforts that are luxuries to much of the world.)

I remember some years ago being in a counseling session with former NWTRCC Coordinator Carolyn Stevens, who responded to the “buy a house” question by saying, “There is nothing wrong with renting. Millions of people do it.” Such a straightforward simple response (not to mention that property seizures are very rare in our network these days and most resisters don’t work up a big enough debt to warrant such an action anyway.)

Perhaps to bolster renters such as myself, the New York Times had a good article recently titled “To Buy or Rent A Home? Weighing Which is the Better Choice.” (April 2, 2016)  The author challenges the automatic assumption that home ownership is better than renting and lays out factors that should be considered before buying: how long you might stay in that locality; costs of maintenance that can add up over time; local trends that indicate whether the property will gain value (which buyers tend to assume); and more. She cites a study from one community where renters came out ahead financially over an eight-year period. There’s a link to a calculator to help people compare buy vs. rent given their own situation.

That calculator won’t factor in conscience, but the article offers some good responses to people who really don’t want their money going to war and violence but feel the pull of property ownership.

I guess with all the red, white and blue of the big-party conventions going on as I write this, the American Dream is on my mind. It was good to read a recent Waging Nonviolence blog post about creative protest at the conventions that includes a description of “Melting Away,” an ice sculpture of the words “The American Dream” on display — as long as it lasts — at both conventions. 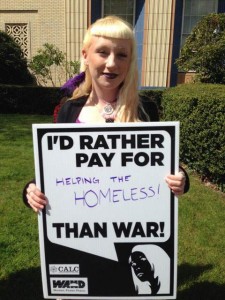 Lastly, a different angle on home ownership is described in a pictorial essay by war tax resister Robert Riversong, titled Constructive Program – Building on Our Ideals. He describes the Building Our Swords Into Plowshares community house-building project that grew out of the war tax resistance campaign around the seizure of the Randy Kehler/Betsy Corner home in Colrain, Massachusetts, in the late 1980s. For those who think house seizure is the worst that can happen, it’s a reminder that the worst case scenario can result in something very positive.

3 thoughts on “Resisting in Dreamland”