Note that this blog post, like all of our blog posts, are the opinion of the author and don’t represent any official NWTRCC position.

Short answer: There aren’t any presidential candidates against war taxes.

As we all know, success in national major-party politics requires a commitment to a certain kind of discourse about war: the US military is righteous and honorable, and firm in its commitment to killing terrorists by any means necessary. There will be no sufficient apology (if any is possible) for all the lives ruined in the violent pursuit of peace. No expense must be spared in ensuring that the US military is the most powerful in the entire world.

While Democratic and Republican candidates might call for tweaks to the scope of US militarism, the essential rightness of military intervention is never questioned. Discussions about reducing military spending focus, generally, on reducing “waste,” if a presidential candidate mentions it at all.

There’s quite a debate on social media and news opinion sites as to whether Bernie Sanders is an anti-war candidate, and to a lesser extent, whether Donald Trump could be considered an anti-war candidate. While Sanders opposes torture, he has repeatedly stated his support for drone warfare (Trump supports both). However, among many anti-war folks, including war tax resisters, Sanders has gained a following for his critique of mainstream war policies and interventionism. In my view, he is not an anti-war candidate, but he is significantly less eager for military intervention and human rights violations than either Trump or Hillary Clinton.

Justin Raimondo, a columnist at Antiwar.com, stirred up quite a fervor among readers for his article that in part argued that Trump posed a significant challenge to militarism:

… if Trump actually wins the White House, the military-industrial complex is finished, along with the globalists who dominate foreign policy circles in Washington. While Trump is no libertarian, the effect of this sea-change in the foreign policy realm will be to objectively cut the dominance of federal power in our lives, first of all by saving us from bankruptcy and freeing up resources for the private sector, and secondly by reducing the blowback that has empowered terrorists.

Personally, I think that labeling Trump anti-interventionist is short-sighted. It’s reading an entire foreign policy platform into a few lines questioning NATO, the second Iraq War, and nuclear weapons, while ignoring his numerous statements calling for a generally belligerent nationalist foreign policy. Many of Trump’s “anti-interventionist” arguments are based on the costs of a worldwide military presence, rather than the effects of that presence. Nevertheless, many neoconservatives are expressing support for Clinton instead, concerned about Trump’s inclination to isolationism.

I haven’t heard anyone arguing that Hillary Clinton could be an antiwar candidate; a typical article that discusses her “national security” record calls her an “unabashed war hawk.” As First Lady, Senator, and then as Secretary of State, Clinton has explicitly supported US military engagement in Afghanistan, Bosnia, Iraq, Kosovo, Libya, and Syria. She has supported providing weapons to Israel, Saudi Arabia, and Ukraine (among others). She served on the Senate Armed Forces Committee. 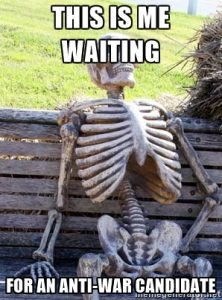 Some presidential candidates from third parties, such as Jill Stein and Gary Johnson, express skepticism of the military-industrial complex and call for reductions in spending. Notably, Jill Stein has called for reducing military spending by 50% and closing foreign military bases. Johnson takes a fiscally conservative approach to militarism, calling for scaling back military engagement and spending to focus on the “real” threats. Stein comes closest to being anti-war-taxes of any candidate that I’ve mentioned so far. However, neither candidate has much visibility or ability to affect the broader discourse about militarism.

For myself, I can’t see what good will come of reluctantly voting for any candidate. I don’t think it’s meaningless who becomes president – but it will be some sort of disaster in either case (I don’t think this will be a good year for third parties).

What do you think?