“Creative maladjustment” emerged as a take-home theme (at least for me) from the day I spent at the “Faithful Witness in a Time of Endless War: Drone Warfare and God’s Call to Peacemaking” conference on June 25 in Lansdale, Pennsylvania. Speeches and Q&A sessions were followed by an afternoon demonstration at the nearby Horsham Drone Warfare Command Center.

This call to creative maladjustment flowed from talks on Friday night that centered on drones, with presentations by Codepink co-founder Medea Benjamin, whose book Drone Warfare: Killing by Remote Control, inspired many to act. She told stories about victims of U.S. drone policy. Christopher Aaron spoke about drones from his inside experience working for the predator drone program in the CIA; ethical concerns led him to resign in 2009. Bob Smith of Brandywine Peace Community (a NWTRCC contact and co-sponsor of our recent gathering) has organized countless demonstrations against the Drone Warfare Command Center at Horsham. 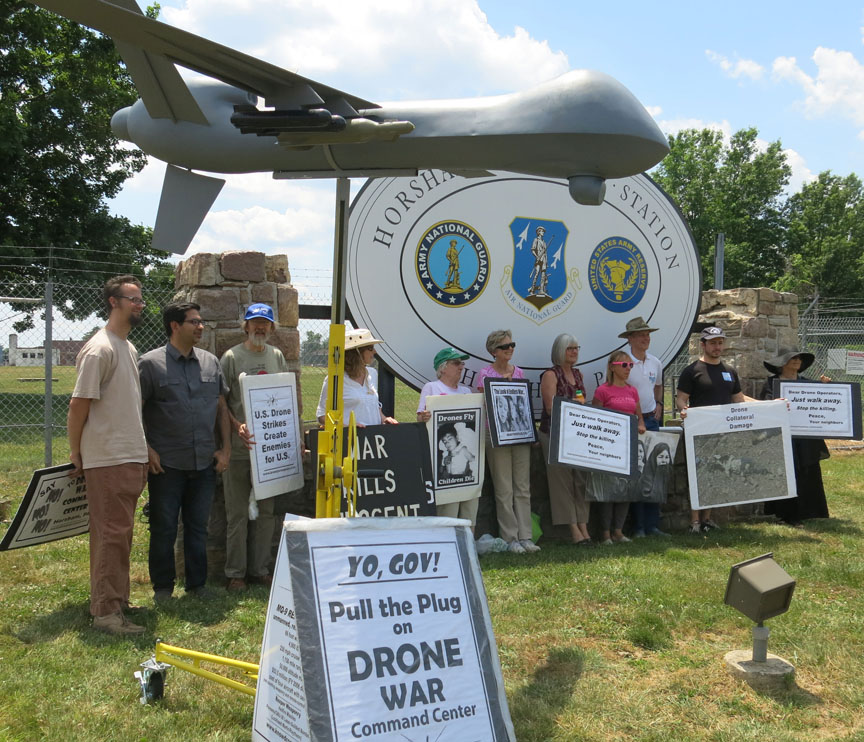 Some of the vigilers at Horsham were also speakers at the conference, including on the left Shane Claiborne, Mohammed Malik, and Titus Peachey. Medea Benjamin of Code Pink is in the group in front of the Horsham sign with Rev. Kelly Denton-Borhaug to her right, and Christopher Aaron in the black shirt.

The Saturday morning session delved into the realities of the U.S. war culture — the reason being maladjusted is a positive attribute. Former Army Chaplain Rev. Chris Antal joined the military to minister to the wounded and serve his country, but seeing drones in Afghanistan “broke his soul” and was a key factor that led to his resignation (he told his story recently on Democracy Now). The peace quilts on the stage were made by his congregation, which allowed for much conversation on war and peace issues. 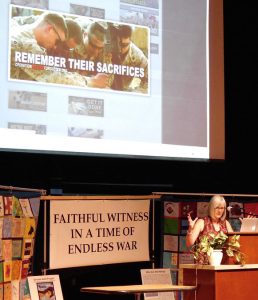 Rev. Kelly Denton-Borhaug gave examples of how the language of sacrifice squelches conversation about war. The injuries of soldiers are not sacred but tragedies that should demand an end to war. Photo by John Lien, Coalition for Peace Action.

Rev. Kelly Denton-Borhaug reacts to peace activists singing “Ain’t Gonna Study War No More” with the advice “we do need to study war” in order to figure out how to reach “U.S. citizens who have little consciousness of the war culture they are in.” Military ads at the movies or a movie ad linked with an army ad, like the current one for Independence Day II, are just taken in without question by most viewers. Peace activists need to understand the war culture in order to create effective actions.

Speaker Shane Claiborne of The Simple Way community in Philadelphia (an outgrowth of the Poor People’s Economic Campaign, with whom we toured in May) reminded us of that “maladjusted” quote above in his talk titled “The Holy Mischief of our Faithful Witness.”  The Simple Way is based in a neighborhood overwhelmed by drugs and guns, and their actions evolve from local events and make connections to national and world events. Watch a video about the guns into plowshares project.

Mohammed Malik, a co-founder of Muslims for Ferguson, started off his talk by saying we’ve had enough witness; it’s time to take action and resist. Peace activists need to make more effort at participating with diverse communities, especially the Muslim communities. Breaking through Islamaphobia is an essential to ending these endless wars. Malik practices what he calls “intersectional organizing,” in particular trying to connect antiwar activist with anti-racism movements. We can “resist and co-resist,” he says.

The conference was organized by the Rev. Bob Moore at the Princeton, New Jersey, based Coalition for Peace Action’s Interfaith Network on Drone Warfare, with local organizing help from our friends at 1040 for Peace, including H.A. Penner, John Stoner, and Daniel Riehl. 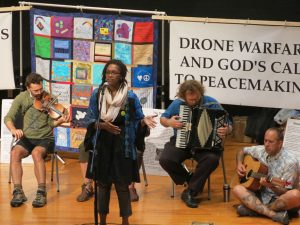 After speeches and talking we all realized that music and performance are essential to creative outreach. Blew Kind had started the day with her spoken word piece “Buzzing of a Bee.” Click on the photo to listen to an earlier performance. 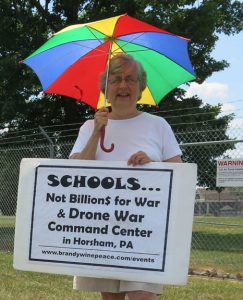 War tax resisters were well represented at the conference and demonstration, including our friend Linda Gehman Peachey.

All of the talks were recorded and will be made available online through the Interfaith Network’s website. Thanks to all the organizers for a motivating program!

—Post and photos (except where noted) by Ruth Benn

One thought on “Maladjusted to a War Culture”