I have a pile of clippings from newspapers and magazines intended for notes in the NWTRCC newsletter. They go back a few years because the newsletter pages seem to fill up before I get around to the clippings, and the pile keeps growing. 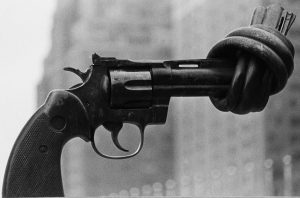 I was pulling out some of the articles that have to do with tips for dealing with the IRS that might be of interest to war tax resisters, but with another mass shooting in the headlines those articles seem somewhat trivial. In a world of such violence, my mind wanders to that fear of war tax resistance expressed by so many: “I don’t want to go to jail.” Well, neither do I actually, but these days going to jail for refusing to pay for violence and war seems pretty darn honorable.

For many of us in war resistance, the issues of guns in our culture and the endless wars are connected. To hear the president and elected officials talk with dismay about these killings at home while authorizing and funding mass killings abroad “makes your blood boil,” as my dad used to say.

Because this shooter was of Afghan heritage, one’s mind goes to the wars in the Middle East. But today is a day of action about Honduras to demand justice for the assassinated activist Berta Cáceres, a reminder of the many wars funded by U.S. tax dollars. On Democracy Now this morning a colleague of Berta’s, Tomás Gómez Membreño said:

This economic support that the United States provides to the Honduran military and security forces comes from the tax dollars paid by U.S. citizens, and that cannot be sent to a state where we are assassinated, and that happens in Honduras. The military and police carry out repression against our people.

While thinking about this connection to endless war and seemingly endless gun violence, I also ran into an essay and thought-piece by one of our longtime war tax resistance contacts, Glen Anderson in Olympia, Washington. Posted on the Western Washington FOR website, his article is about the U.S.’s endless wars and militarization of our culture that emanates from policy at the highest levels:

When an international crisis occurs, Americans want our government to “do something.” Because militarism has been the U.S.’s default policy, “do something” is nearly always assumed to mean “do something violent! Honest diplomacy (sincere communications for nonviolent problem-solving) is “off the table.”

One of the quotes he references in this article is Martin Luther King Jr.’s “The bombs in Vietnam explode at home; they destroy the hopes and possibilities for a decent America.” This makes me think of the domestic violence prevention and mental health care programs that are underfunded and might help prevent some of these shootings. Glen’s last section on “True Security” offers a platform for peace campaigns to which he invites comments and responses.

One other article in my pile that I was glad to read again is a piece from the June 19, 2014, New York Times, “Dissimilar Figures, Revolted by Carnage: John Singer Sargent and Randolph Bourne, Dissenters” by Holland Cotter.

The author writes about the “semi-visible afterlives” of two completely different works created during World War I that deserve more attention. Singer Sargent was commissioned to paint something stirring about war, but when he traveled to the battlefield he saw the horror instead and painted “Gassed”, which hangs in the Imperial War Museum in London. It’s a painting worth studying, and the link allows you to get in very close.

At about the same time Randolph Bourne was writing his antiwar essay that includes the phrase “War is the health of the State,” left unfinished when he died of influenza in New York in 1918. But this brings us back to guns, since I also just ran into an article from January 2016 Mother Jones about how states offer tax incentives and subsidies to gun manufacturers.  Violence is the health of the state….

So many reasons to get your blood boiling — and your resistance going.

P.S. from Erica: War tax resister Susan Miller recently wrote an essay about her experiences after a mass shooting in Hesston, Kansas on February 25, 2016. An excerpt:

But there I sat, Feb. 25, 2016, in a lockdown in my own home with the voices of news reporters announcing to the world that Hesston had joined the growing list of locations where gun violence hit innocent victims and traumatized the community, especially those who witnessed the shootings and tried to protect their fellow workers.

Why should Hesston be immune to the violence in our nation which so far this year averages more than one mass shooting per day?

When the next one happened after Hesston, I didn’t know how to take it. Relief that Hesston was not singled out? Sadness that violence continues? I wanted to say: Wait! We’ve only started grieving. Don’t add to the grief!

The association of domestic violence with mass shootings; the association of numbers of guns in our country with numbers of killings; the too common thinking that all will be well if guns are only in the hands of good guys (and nuclear weapons are safe if only in the control of the U.S. and her allies); the lack of financial support for healing while half the national budget pays for war; and the fact that we’re all too busy to really get to know our workmates and neighbors and offer to listen and help when they need us – all these and more let violence continue.

One thought on “An Unhealthy State of Things”