(Introductory editorial note: On February 15, Activist San Diego hosted a teach-in about war tax resistance, organized by Anne Barron, a war tax resistance counselor and NWTRCC network activist. The promotional materials said: “Communities around the world are resisting American militarism. Join us in a discussion of how each one of us can defund the Pentagon. There are so many ways we pay for war while working for peace. Join us in examining ways each of us can divest from the Pentagon and support resisters!”)

We started off the teach-in with food, delicious fresh tapas by a local cooperative, Saboteurs Kitchen.  I felt great about redirecting our war tax dollars to local entrepreneurs.  Andrea of Saboteurs talked about the importance of a cooperatives-based local economy while I made the links between the commodification of food as a product of a military-based economy, the current US factory food system, and the need for local control over our food.

About 20 of us sat in a circle on (ironically) President’s Day to talk about defunding war.  The two presidents honored by this federal holiday both presided over bloody wars that raged on the “homeland,” both wars economic in nature (counter to what our high school history says). We could have talked about the horror of those wars, who benefited, and how they could have been avoided by peaceful means.  We can look to Canada and India, which had more peaceful separations from England.  And we can look to the civil rights movement of the 60s as a much stronger counter to racism and the institutions of slavery.

Large post-its on the walls invited people to write in ways each of us support War & Peace either willingly or unwillingly.  What became clear was how little we understood all the different ways we support the military-industrial machine even while working personally for peace.  We are in a system that works to keep the military on top. San Diego is home to a large military base, one of our large employers. So we talked about the ways we support the military infrastructure here in San Diego, glorifying and/or celebrating war, how selective service draws in our children and how the pension system funds war interests/corporations, 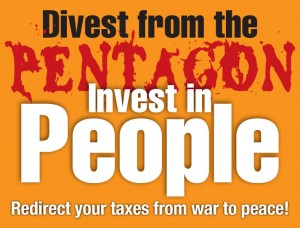 As expected, I handled a lot of questions about the IRS and problems tax resisters face.  There was definitely interest in divesting from the Pentagon, conflicting with personal concerns about the repercussions.  Someone voiced the fear that WTR would bring unwanted attention from Homeland Security or audits. Since I remember my concerns about the IRS at the beginning, I could relate.  However, I am pretty sure we are all on some list somewhere because of the meetings we attend rather than because of WTR! Always good to request your file from the FBI on a annual basis, you know…like tax day.

Although I myself practice WTR as civil disobedience, I was able to point to all the ways many of us in the movement resist both legally or/and through direct action, and how important the support of fellow WTR/NWTRCC members has been to my resistance.  The practicals about withholding and living simply were the most popular.  A good number of people I have met actually don’t pay a lot in taxes for a number of reasons, but I always tell them my goal is that they pay $0 to the military.  I wanted to have some of David’s “99 Tactics of Successful Tax Resistance Campaigns” on hand and will have to make sure to order some in time for the next ones.  His story seemed to resonate strongly; and someone forwarded me his Truth-Out Article after the Teach-In.

Grateful thanks to Activist San Diego for hosting the Teach-In, and Saboteurs Kitchen for providing delicious treats in a socially conscious manner.