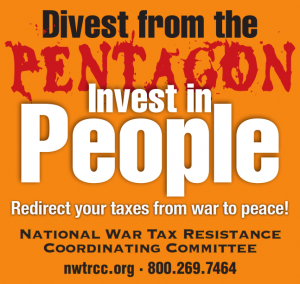 From Martin Luther King Jr.’s Birthday to Tax Day
A Call to Invest in People, Divest From the Pentagon

Dr. Martin Luther King Jr. denounced the deep connections between United States militarism and the social and racial problems in the United States. He warned of the moral injury created by the war in Vietnam and the impact of war back home. As our country celebrates his life, war tax resisters call for action to shift national priorities from war spending to peace.

King’s birthday and the annual holiday coincide with the time when the Internal Revenue Service releases new tax forms and “pay your taxes” promotions. In response, the National War Tax Resistance Coordinating Committee (NWTRCC) is calling for individuals and groups to participate in Days of War Tax Action with the theme “Invest in People, Divest from the Pentagon.”

Dr. King was inspired by the writings of early war tax resister Henry David Thoreau. King wrote, “As a result of his writings and personal witness, we are the heirs of a legacy of creative protest.” In 2016, when the U.S. spends more than the next nine largest military budgets around the world combined and countless human needs go unmet, it is time to renew the call for creative protest.

The Days of War Tax Action will take place between January 15 and Tax Day, April 18, 2016. Inspired by the great civil rights boycotts, individuals and groups are called upon to take direct action to defund endless war and rebuild our social systems. Along with educational programs and nonviolent protests, many individuals will refuse to pay some or all of their federal taxes that contribute to military spending and will redirect those taxes from war to humanitarian projects.

National War Tax Resistance will publicize actions and support chapters and partners across the country participating in “Invest in People, Divest From the Pentagon” actions. Chapters from Southern California to Maine are committed to partnering with peacemakers to highlight the connection between U.S. militarism and misplaced priorities on local issues from homelessness and economic disparity, to militarization of police and climate change.

San Diego resident and war tax resister Anne Barron notes the success of community outcry when the local police and school district accepted a “gift” of a mine-resistant ambush protected vehicle (MRAP) from a Pentagon program. “The district was forced to return the tank, thanks to community push-back. Now we are pushing back on militarized police training, demanding community oversight and divestment from the Pentagon.” Barron will collaborate with Activist San Diego and the San Diego Peace Resource Center on an “Invest in People: Divest from the Pentagon” teach-in and February movie nights.

Bill Glassmire, in Corvallis, Oregon, is working with the local climate change activist group 350.org to include connections between war and environmental destruction. Jason Rawn is building similar connections in Maine. During U.S. tax season, Rawn will also take his war tax protest to Okinawa and Gangjeong Village on South Korea’s Jeju Island, where the U.S. is building a new naval base that is being fought by local activists.

Between now and tax day a list of actions and materials for local activists will be posted at nwtrcc.org, and a list of speakers and contacts is also available on the website.

The National War Tax Resistance Coordinating Committee (NWTRCC) is a coalition of groups from across the U.S., formed in 1982 to provide information and support to people involved in or considering some form of war tax resistance. NWTRCC promotes war tax resistance within the context of a broad range of nonviolent strategies for social change, and is firmly embedded in the peace movement.