“The Mysterious Ways of the IRS” was a topic of conversation during a recent war tax resistance (WTR) workshop. Many of the questions from resisters —whether new or longtime — related to “what might happen when.” If I file, when will the first IRS collection letter arrive? How long will it take them to seize my bank account? When will they garnish my salary?

One of the difficulties of this form of war resistance is that there often is no absolute answer. We know this from the decades of experience by war tax resisters. A motto for WTR counselors is “There’s what the IRS can do, and there is what the IRS actually does.” What surprises many new resisters is that the gap between those two is wide and unpredictable.

At the workshop, one self-employed nonfiler mentioned that a couple of his employers received levies for him recently – the first time the IRS has levied him since the 1970s. Many resisters and potential resisters might find it easier to spend a few weeks in jail rather than years worrying about when the IRS might take action. 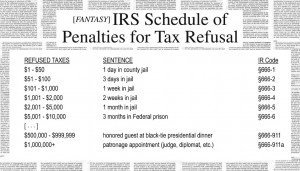 Click to see a larger version of this chart.

WTR counselor Ed Hedemann considered this dilemma and created a “fantasy IRS penalties chart” (going with the government’s assumption that war resisters should face penalties for trying to end war to begin with…). It never hurts to laugh in the face of fear. Creating your own penalty chart might help put things in perspective as you consider the consequences of your method of WTR. (Send us a copy if you do.)

On the flip side, one of the positive consequences was well put by Juanita Nelson: “War tax resistance is a way of keeping at the front of my mind the killing and suffering wrought by the government’s policies, and of voicing my profound disagreement with those policies.”

When the media pays attention to the U.S. government’s endless wars, they often say that only the families of people in the military think about the wars. As war resisters we know that that is not true, and for war tax resisters endless war can come to mind on all sorts of occasions: when applying for a job, needing to cash a check, considering retirement, going out to get the mail. Government policies and the victims of those policies are often “at the front of our minds,” and we work anxiously for the day when such decisions can be made with a clear conscience.

To help lessen the fear and sustain war tax resistance, seek support in the WTR network, and check out some of our resources, particularly the booklets on Resisting Collection (#3) and Low Income/Simple Living (#5). Let us know if you have ideas to add to these resources by emailing nwtrcc@nwtrcc.org.