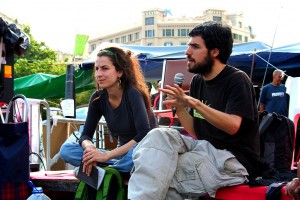 On October 1, 2014, I had a Skype chat with Enric Duran, an extremely active organizer in the Spanish tax resistance and collective economy movements. Enric is a key organizer of Derecho de Rebelión (Right of Rebellion), a movement about which David Gross has reported to us before. Derecho de Rebelión arose in response to the Spanish government’s prioritizing of foreign debt over the provision of public services. The movement has created Offices of Economic Disobedience in cities around Spain, which  have open hours and various activities to provide advice and encouragement to people considering tax resistance. (You can read David’s article on that movement here. If you read Catalan or Spanish, check out the Manual of Economic Disobedience on the Derecho de Rebelión website, and for English readers, David has also translated some excerpts on his blog – find the links to each excerpt here.)

Enric says that the Derecho de Rebelión movement was influenced by prior anti-militarist tax resistance, but that their work is

to not only make tax resistance because of [anti-militarism], but because a lot of topics related where we [don’t] agree with the government, especially the percent of debt the government is sending to parties, to the banks, before to maintain the social services and work the people needs. We have these kinds of tax resistance from three years, 2012 and 2013 and 2014, and there are groups working on this in different cities in Spain, like Madrid, Castellón, Barcelona, Mallorca…

Like resisters in the US, tax resisters in Spain may practice complete tax resistance, not just refusing to pay the military portion. Resisters of all kinds are redirecting taxes to create self-managed cooperative alternatives to government and banks, taking their efforts out of pre-existing institutions altogether:

[The Catalan Integral Cooperative] is working on a tax resistance… with the IVA — that is an indirect [value-added] tax that comes with every bill. And we are using this to make internal distribution [of money] between all the projects and all the priorities that exist inside the cooperative.

The Spanish movement is not without its issues. One problem is that many folks in Catalonia, for example, are already outside the tax system:

He also identifies the importance of group action and support to a successful tax resistance movement:

The importance to be together and to make collective movement and not so individual. People need to feel that we are a group and have support to do it… It’s a difficult topic because in general, a lot of left movements are forced to where we are with the paying of taxes, to have more taxes for the public budget. We are taking another way to make self-managed these taxes, and sometimes it’s difficult to get more support at this level.

What’s next for the collective movements in Spain? Enric responds:

Well, in fact, what we are trying to do, is attain more independence and more free[dom] from the banking system, so for us the disobedience is a part of the building of the alternative economic system. We are working to retain more out of the system with different tools at the economical level that we can use for cash in, for cash out, for payment, to have less necessity of the banking system.

The new website, Fair.coop, is part of those efforts, featuring the Faircoin cryptocurrency (like Bitcoin, but focused on meeting collective needs), Faircredit, Fairsaving, and Fairfunding programs. It is truly an enormous effort and they continue to seek involvement from groups around the world. Presently very few people from North America are involved. Anyone who signs up with Faircoin can deposit money in the system. As the system becomes more robust, funds will be available for loan to cooperative initiatives, in addition to the savings and funding schemes that allow people to keep their money away from traditional banks. Read Enric’s introductory statement about Fair Coop here.

Tax resistance and cooperative movements in Spain are working hard to develop a revolutionary, nonviolent, independent economic system. I look forward to seeing what the Derecho de Rebelión and Fair Coop movements are able to accomplish.

P.S. You can read another very interesting interview with Enric Duran on the Catalan Integral Cooperative website.