A blazingly hot sunny weekend greeted attendees of last week’s NWTRCC conference in San Diego. The Administrative Committee met on Friday as traveling attendees trickled in to the Peace Resource Center of San Diego, our host for the weekend.

Our Friday night dinner potluck was cohosted by the Church of the Brethren, which shares the property on which the Peace Resource Center is located. They regularly hold Friday night potlucks with the community. Several of us went with Peace Resource Center director Mariah Gayler to the Peace Garden to pick a variety of greens for an enormous salad. 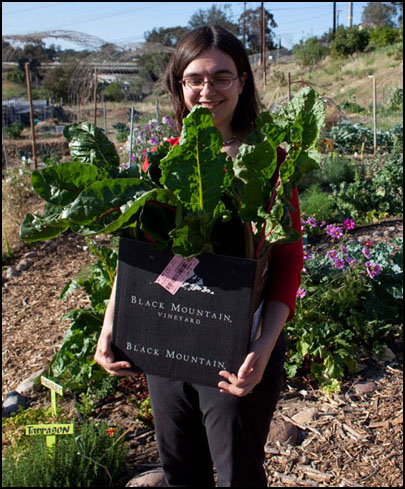 Erica with an overflowing box of kale and chard for our Friday potluck salad. Photo by Ed Hedemann. 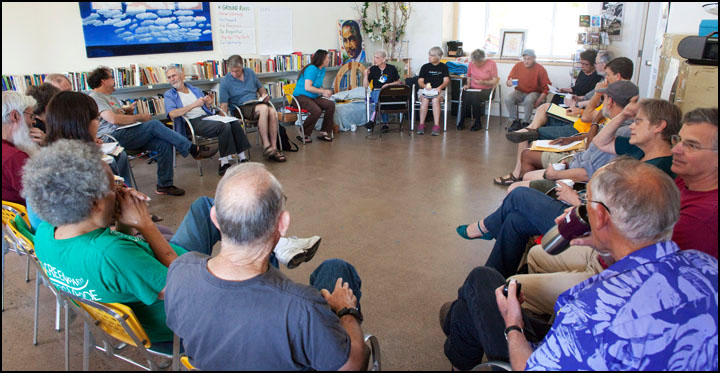 We sit in a circle for our Saturday morning introductions and discussions. Photo by Ed Hedemann.

On Saturday, we had workshops and presentations on the Trans-Pacific Partnership and local anti-militarization struggles in public schools, the usual war tax resistance 101 and updates workshops, discussion of tactics and messaging and outreach for NWTRCC, a workshop around the War Tax Resisters Penalty Fund, and a workshop to introduce folks to NWTRCC’s social media presence. In the evening, we ate some enormous local pizza, drank some local beer and wine and had some great conversations about generational gaps in activism and anti-war work! 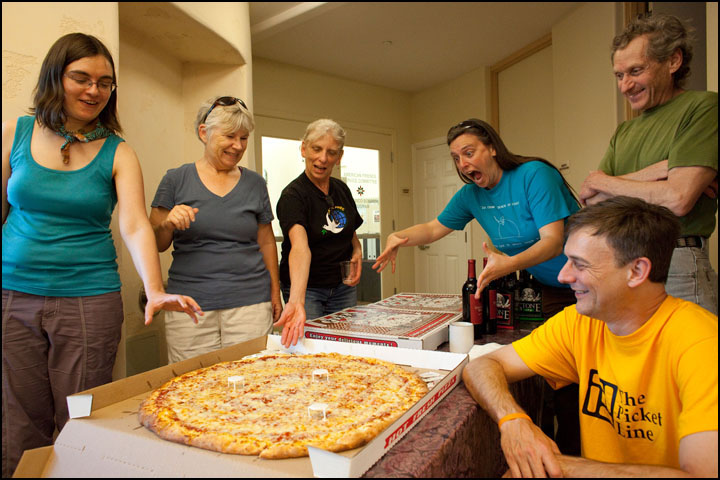 Several of us gathered around an enormous pizza. Photo by Ed Hedemann.

Attendance was higher in the morning and early afternoon, with about a half dozen San Diego locals joining us for workshops, and seemed to fall off throughout the day, so that we had only about a dozen folks by dinnertime. As others have noted, we don’t have much of a WTR base in San Diego, and this is the first time we’ve met there in 25 years! Plus, we’ve only just gotten to know our recent affiliate, the Peace Resource Center. So we made some good connections for the future.

Sunday morning was NWTRCC’s regular business meeting and it was the smallest one in my memory, with about 10-12 folks (granted, my NWTRCC memory extends only back to November 2008). I thought this might lead to a shorter meeting, but we actually used up the whole time – it just meant we each had more time to talk! Many of us flew out of town shortly after the meeting, while a few folks took a quick trip to the ocean.