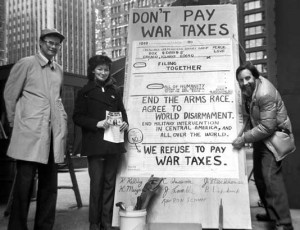 Karl Meyer (right) protesting outside the IRS office in Chicago in 1987 with Brad Lyttle and Kathy Kelly. Karl is filing their joint return with a 14-foot bastard file.

Karl Meyer is one of our country’s most knowledgeable counselors and practitioners of strategies and methods for maximizing war tax refusal, while minimizing negative consequences, such as job loss, seizure of assets, or criminal prosecution.

He has successfully refused payment of almost all federal income taxes that might have been claimed from him for 49 years, since 1960.

In 1966, he wrote the first leaflet on reasons, methods and potential consequences for telephone excise tax refusal, which sparked a mass movement during the Vietnam War.

In 1968 and ’69, he authored the first articles and pamphlets on methods and consequences of claiming extra allowances on W-4 Forms in order to prevent withholding of military taxes from wages and salaries. This opened the way for thousands of wage earners who refused war taxes during the Vietnam War.

In 1971, he served nine months in federal prison and fifteen months on parole, essentially for his role as ringleader of the W-4 resistance movement.

In 1984, trying to spark a mass movement to resist the new $500 penalty for so-called “frivolous tax returns”, he filed 365 daily tax returns, to many different IRS offices around the country, and gained national attention for the issue after the IRS fined him $140,000 for a total of 280 of those returns. The IRS succeeded in collecting only $1000, by seizing and auctioning a secondhand station wagon.

Karl was the principal author of #1, 2, 3, and 4, and a contributor to #5 and 7, of NWTRCC’s current series of pamphlets on Practical War Tax Resistance.

Across the span of a half century of effective war tax refusal, the IRS has collected less than $1200 of an estimated total of about $250,000 that was or might have been claimed from him, not to speak of added penalties and interest — a successful collections rate of about ½ of 1%.

At 75, he continues in not filing returns and not paying federal taxes on income as a self-employed carpenter (semi-retired).