What is War Tax Resistance? 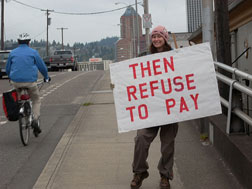 War tax resistance means refusing to pay some or all of the federal taxes that pay for war. While you can refuse income tax legally by lowering your taxable income, for many people war tax resistance involves civil disobedience.

In the U.S. war tax resisters refuse to pay some or all of their federal income tax and/or other taxes, like the federal excise tax on local telephone service. Income taxes and excise taxes are destined for the government’s general fund and about half of that money goes for military spending, including weapons of war and weapons of mass destruction.

People take many roads to war tax resistance. Most are motivated by a combination of reasons and actively work for peace in many other ways too. If you consider your motivations this will help you determine your method of resistance.

Refusing to pay federal income taxes is an act of civil disobedience with a long history in the U.S. America’s most well-known war tax resister was Henry David Thoreau, whose refusal to pay his poll tax because of the Mexican-American War earned him an night in jail and the experience that led him to write his influential essay, Civil Disobedience. While those of us who refuse to pay war taxes believe our refusal is just and imperative — and some of us cite international law to back up this belief — the government considers the refusal to pay these taxes to be illegal, and there are potential repercussions through the IRS collection system. For most of us who resist, the dire consequences of voluntarily paying for war are far worse that what the IRS and government can do to us.

War tax resisters are not out to enrich ourselves by evading taxes. Some of us live below the taxable income limit to avoid as fully as possible participating in war-making. Others who refuse to pay taxes to the federal government contribute that money instead for human needs here in the U.S., aid and relief work in war-torn regions, peacemaking, or international cooperation.

Which Are the War Taxes?

There are many taxes and not all are war taxes. Taxes can be federal, state, or local in origin. They can be in the form of income taxes, customs duties, sales taxes, excise taxes, social security taxes, property taxes, and so forth. While people may take issue with state or local government spending and be concerned about their state’s contribution to national guard troops and other war-related expenses, the National War Tax Resistance Coordinating Committee focuses on the federal taxes that fund war.

There are some federal taxes that pay into “trust funds” that the federal government ostensibly holds in trust to be spent only on the specific programs for which they were collected. The largest such fund is the Social Security Trust Fund, contributions to which are removed from each paycheck as FICA (Federal Insurance Contributions Act) or are collected quarterly from self-employed people. The airport trust fund, which is collected as an excise tax on air travel, and the highway trust fund, collected as an excise tax on each gallon of gasoline, are other examples of federal trust funds.

Historically governments have often enacted taxes specifically to pay for war. During World War Ⅱ, for instance, a “defense tax stamp” was required for all cars driven in the United States. But today no single federal tax goes solely to war. The funds generated by most taxes are mixed into a general fund — perhaps purposely, so as to disguise spending details and confuse the taxpayer.

The largest and most important war tax is the individual income tax. It makes up almost three-quarters of revenue for the general fund. Other taxes that contribute directly to military spending are corporate income taxes, some excise taxes (such as those on tobacco, alcohol, and local telephone service), estate and gift taxes, and customs duties.

U.S. savings bonds (formerly known as “war bonds”), though not a tax, are another means by which the government obtains money from people for federal programs — including the military. If you have such funds in your investment portfolio, you are loaning the federal government money to enable it to conduct war. Tax money that is destined for trust funds like the Social Security trust fund is invested in such government bonds and thereby also supports military spending. For this reason some war tax resisters refuse to pay taxes that go to these trust funds as well.

Income tax
What you pay by means of federal income tax withheld from your paycheck throughout the year and any additional amount you pay on April 15 goes into the general funds part of the budget. The individual income tax is the largest portion of federal revenue. War tax resisters tend to focus on individual income taxes and general funds, because they are a part of Congressional spending authority that is directly used for military spending, as opposed to trust funds which are funded by taxes denominated for spending on some specific program like Social Security, Medicare, highways, or air travel (see payroll taxes below).
Taxable level
People who earn a low enough income do not owe federal income taxes. This level shifts some each year and depends on your filing status (single, married filing jointly/separately, head of household, etc.). NWTRCC publishes the baseline level in our February newsletter each year. There are also ways to earn a much higher amount and, by using legal credits and deductions, to fall below the taxable level and not have to pay federal income taxes.
Withholding
If you earn a paycheck at a salaried job, your employer takes out some money from each check and sends it to the federal government instead of giving it to you. This procedure, called “withholding,” is designed to send to the government something close to the total amount it demands from you in tax during the calendar year. From the government’s point of view, when you file your income tax form in April, you should owe or be refunded only a small amount — the difference between what was withheld during the year and what the government expects. Note that if you are getting a refund at the end of the year you have given the government an interest-free loan to conduct its wars.
W-4 form
When you start a salaried job, the payroll department asks you to fill out a W-4 form and to declare your number of allowances (see below) in order to establish how much to withhold from your paychecks. How you fill out this form can determine your ability to resist. You can ask to change your form at any time.
Allowances
What you declare on a W-4 form. Do not confuse this with “dependents,” which you will see listed on a 1040 form. The law allows people to claim allowances for themselves, for their dependents, and for deductions and credits they expect to claim on their tax returns, such as medical bills, mortgage interest, charitable gifts, child care costs, alimony payments, retirement contributions, and many other deductible payments.
Payroll (FICA) taxes
Your paycheck stub shows separate withholding for social security, Medicare, unemployment, and certain other items. These are trust fund taxes ostensibly earmarked for those purposes. Salaried employees cannot resist FICA taxes, which are based on a set percentage of your earnings. Self-employed people, on the other hand, can resist this tax. Opinions differ as to whether it is proper for war tax resisters to pay into Social Security, because of the way the funds are invested and the fact that the government borrows from the trust fund for general uses, including for military spending.
Estimated taxes
If you are self-employed or an independent contractor, the government expects you to pay estimated taxes quarterly — this is “withholding” for non-salaried people. Estimated taxes include both income tax and FICA taxes. When you file your 1040, this is supposed to reconcile the amount you paid over the year with the actual amount you owed. While there are penalties for not paying estimated taxes, the somewhat voluntary nature of this allows great flexibility to war tax resisters. Some states require estimated payments for state taxes also.
Other taxes
Other sources of general funds income include corporate income taxes, estate taxes, customs duties, and the federal excise taxes on tobacco, alcohol, local landline telephone service, etc. Some of these are easier to resist than others, and and some can be avoided.