The first International Conference on War Tax Resistance and Peace Tax Campaigns was held in Tübingen, Germany, in 1986. Conferences are held every-other-year, most often in Europe with a few exceptions: India in 1998; U.S. in 2000; and Colombia in 2013. While the conferences are organized by the local groups, Conscience and Peace Tax International (CPTI) was founded at the conference in Hondarribia, Spain, in 1994, to connect the groups working on legislative campaigns and to track legal issues internationally. The CPTI website includes reports from meetings, links to groups, court documents, and more.

The conferences offer a time to exchange information and experience gained by individuals and groups during their local campaigns; learn about legal issues in individual countries; increase the effectiveness by which our groups offer peace tax legislation and/or war tax resistance as a means for civilians to object against war and war preparation; and investigate the need for an international platform for the national groups to make our efforts more visible on an international level.

After the 2013 conference, CPTI moved from Belgium to England. Reorganizaiton within the international network has taken some time, and there is hope that the next conference will be held in 2016.

NWTRCC has sent a representative to each meeting, and reports appear in our newsletter, More Than A Paycheck (search on international conferences).

Photos and reports by David Gross. 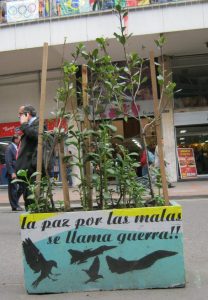 The conference lasted five days, unusually long for these conferences, so as to give us enough time to address and share the specific concerns of both groups.

The international visitors shared an exercise of elucidating the conscientious sentiments that lead them to resist, discussed tactics of use to tax resistance campaigns, shared information on the activities of their local campaigns, and discussed the status of an international organization nominally dedicated to promoting COMT as a recognized human right.

The local activists organized and executed a campaign in which they visited politicians, national and international human rights representatives, government officials, and representatives within the military to express their concerns and pursue their ongoing campaign to strengthen the legal rights of conscientious objectors and stop illegal military press gangs (they were accompanied by the international conferees on these visits).

In between, conferees heard from expert speakers including presidential candidate Clara López and former supreme constitutiona court justice Carlos Gaviria Díaz speaking on conscience and on the prospects for peace in Colombia.

The conference was coordinated by the Colombian group Accion Colectiva de Objectoras y Objetores de Conciencia (ACOOC) and Conscience & Peace Tax International (CPTI). Representatives from several nations joined the conference. This was the first time this international conference has met in South America.

Click on the photo for more photos and a report from the July meetings in Norway posted by Friedrich Heilmann of the Netzwerk Friedenssteuer in Germany.