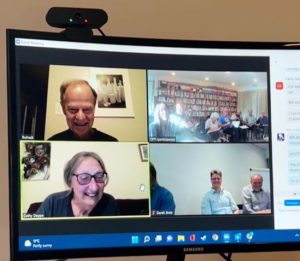 Major Organizing for Conference:  CPTI–Conscience and Peace Tax International Board of Directors, with current leadership from Conscience UK Robin Brookes. CPTI has NGO standing at the United Nations regarding Human Rights Council membership.

Conference focus was on two campaigns: (1) the U.N. Human Rights Council now taking up the Conscientious Objection to Military Service quadrennial resolution submitted by CPTI and to be voted on by early October, and (2) war tax resistance.

I tuned in for the first session at midnight to hear from Dr. Michael Wiener of the OHCHR (Office of the UN High Commissioner for Human Rights). I did miss hearing the introductory remarks by Robin Brooks, CPTI Chair, since the microphone was not turned on. I couldn’t always tell who was speaking because I only saw some of the participants on my screen, and never the main speaker. 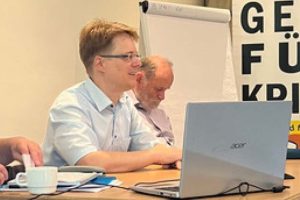 Dr. Michael Wiener (left) from the Office of the UN High Commissioner for Human Rights.

Dr. Weiner gave a historical overview of the last 30 years in regard to “Freedom of Religion or Belief.” He explained that it is common practice to accept a resolution without a vote if no party objects. Also, there are no enforcement mechanisms for resolutions, while treaties carry legal obligations. The first resolution adopted by the Human Rights Council on “Conscientious Objection to Military Service” (COMS) was adopted in 2013, the second in 2017, and now awaits adoption in 2022. At General Assembly, 90% of the countries have accepted it, except for Iran, Saudi Arabia, Singapore, and Cuba!

Positive results triggered by these resolutions include a change in the Republic of (South) Korea, where 18,000 had been jailed for refusing to serve in the military. The country now provides alternatives to military service. Armenia also made a similar U-turn. But many countries still do not recognize COMS either by law or practice.

To strengthen the rights of CO’s, we need to consider those in territories like northern Cypress and a region of Moldavia, where there may be objectors who are not protected because they do not belong to a recognized “state,” yet may be forced to fight. In Ukraine, men 18-60 years old cannot leave the country or their residence, and the CO provision that previously existed for alternative service is no longer available.

After the conference on WORLD PEACE DAY (21 September 2022), CPTI was to be part of an international protest in favor of CO’s involved on all sides of military conflicts. There are implications here for LGBTQI folks. 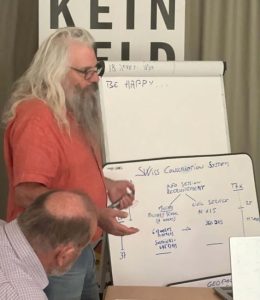 Cristophe Barbey speaks to the military tax situation in Switzerland.

Cris Barbey, the CPTI rep from Switzerland, who also represents CPTI at the UN, spoke about the three strategies for war tax resistance: (1) withhold and redirect, (2) go to court and then appeal using local and international law, and (3) pass legislation (e.g., peace tax fund legislation).

The Italian delegate said Italy has a mechanism to allow some taxpayers to direct some taxes away from or toward things.

The German delegate said Germany is experiencing a dramatic increase in military taxation. It is now 2% of GNP.

This began at 5:30 AM Pacific Time. First, there was a review of the U.N. structure, which I found very informative, if a bit tedious.

CPTI’s NGO status allows it to submit allegations to the Special Rapporteur, who has 60 days to write a letter and who can call a press conference!

When a country has a human rights crisis situation, the U.N. calls for investigation by a Special Rapporteur (SR) expert in the particular human rights issue. The SR follows a process:

Derek Brett, also a CPTI rep at U.N. from Switzerland, explained that the U.N. website lists all these reports. He described the ten types of Human Right treaties and said it can take years to get a treaty ratified. 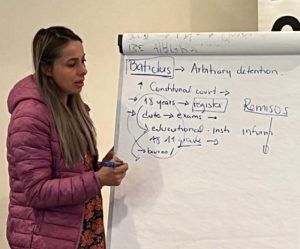 Milena Romero speaks of the military tax situation in Colombia.

Colombia: The goal is to publicize and recognize coups in Colombia. We came to Geneva to speak to the Special Rapporteur about freedom and conscience in Colombia, but our country itself is not open to including CO protections in military law. Military police still stop people in the streets and demand to see the “certification” they need to carry to show they have registered as available for military service.

United Kingdom: Conscience UK goal is to be more visible and to pass the Peace Tax Bill, with a 3-stage plan of

400 people have signed up to write letters to members of parliament.

Germany: Pass the Peace Tax Bill. Reaching out to work in coalition with groups like “Rethinking Security” and “Fridays for Future” and “Green Party.”

The group is shrinking, while military spending up to 2% now, not including a new 100 billion euros only for military materials.

Sent letters to all Protestant churches about Peace Tax Bill – poor response, objections being that taxes are an “individual matter” that the church can’t direct.

Favorite moment for me… Germany post office allows you to submit a requested stamp, they print it and sell it back at more than the stamp itself costs, and you use  it on all your outgoing mail, sell to your members to raise money, get your message out, etc. (My favorite stamp here would say, “Fire the Postmaster General.”)

Switzerland & Italy: Do not have organized groups, yet.

Last Thought: There is a petition we could download and circulate that supports Russian and Ukrainians soldiers’ right not to fight. I asked for it to be sent out to us.