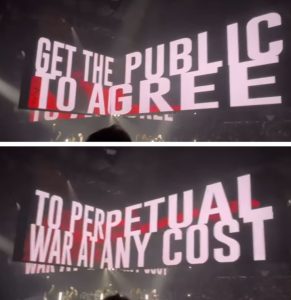 Among the slogans projected above the stage at the concert.

Pink Floyd was not a group I followed lo these many years, although a few of their songs are familiar. Ed made a CD mix of music to accompany our trips to view total eclipses of the sun, so of course Pink Floyd’s “Eclipse” made the cut. “Money” was a hit single in the U.S. back in the 70s so it did get into my memory bank, although I didn’t give it enough of a listen to respond with a comment like this one on the song’s YouTube page:

Kids thinking of joining the military: Take a copy of the Wall Street Journal, any high tech weapons trade magazines, and this song playing through your earbuds. Sitting in the closest legal parking area, facing Raytheon Technologies, Northrup Grumman, Beretta, Westinghouse, etc business parks, factories, airplane hangars… check out the prices of these bad boys’ stocks. …Tell me we went to ‘war’ (against) Afghanistan, Iraq, dozens of known & unnamed countries & entire regions to ‘defend our country’, to ‘keep us free’….

Now it’s thanks to Veterans For Peace (VFP) that I’ve had a full introduction through Roger Waters’ “This Is Not A Drill” concert tour. He’s had a solo career for years, but does a lot of Pink Floyd songs and throws some history of the group into this otherwise massively political show. VFP was invited to have a literature table and received a block of tickets to various shows around the country. Happily for Ed and me, our VFP friends here in NYC allowed us to join them for a Madison Square Garden concert. And kudos to Roger Waters for giving them and other activists this outreach opportunity.

You can find all kinds of video and reviews of This Is Not A Drill on the internet, like this pretty thorough review from the Boston concert mentioning his support of VFP. This review from The Times of Israel is interesting because Waters support of Palestinians inspires protests from some pro-Israel activists.

If you have seen or read about the concert you’ll find a lot to agree with, although if you don’t see the concert live you do miss out on the technological spectacle that goes along with it. What war tax resister would not appreciate seeing the huge projected images of Reagan and all following presidents tagged with “War Criminal” for the thousands that were killed on their orders during their respective administrations, with Biden “War Criminal just getting started”. 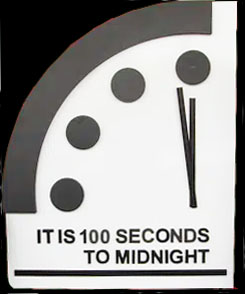 I might not agree with everything Waters says, but I was especially impressed with his adamant speech about the insanity of nuclear weapons as he introduced the first encore, “Two Suns in the Sunset.” With his platform, he informs thousands about the Doomsday Clock, now set frighteningly at 100 seconds to midnight. Included on the YouTube page with a solo version of “Two Suns in the Sunset”, he says:

That we allow Nuclear Weapons to exist in a world controlled by deranged sociopaths is, in itself, a deranged arrangement.
We are many they are few.
We could just say no, to the whole MAD (Mutually Assured Destruction) insanity.
It makes zero sense and is potentially omnicidal.

While Waters sings “Two Suns in the Sunset” a video projects images of nuclear destruction. Members of the New York City government and Emergency Management Office need tickets to a Waters concert. In July 2022 they released a public service announcement telling us how to survive a nuclear attack. The PSA has gotten thousands of views, mostly because it has been mocked from start to finish. The New York Campaign to Abolish Nuclear Weapons posted a “correction” video in response.

Waters says, “We are many they are few”. There are thousands attending This Is Not A Drill concerts. How many of them turn their cheers for his plea against nuclear weapons into action? Somehow this reminds me of a headline in The Onion years ago to the effect of “If one more person had come to the demonstration, the war would have ended.” Perhaps if one more person openly resisted war taxes….