Every year on May 15, International Conscientious Objection Day, War Resisters’ International (WRI) organizes solidarity with conscientious objectors (COs) and draws attention to their resistance to war. This year, with the ongoing war in Ukraine, they turned their focus on the resistance of conscientious objectors from Russia, Belarus and Ukraine, and published statements from the Movement of Conscientious Objectors in Russia and the Ukrainian Pacifist Movement, who have been sharing their calls for peace and repeating their refusal to take up arms. At the same time many others seek refuge in other countries to avoid being conscripted or as deserters.

Get Out! campaign logo

WRI also shared links to a new campaign, Get Out!, launched by a coalition of groups and organizations internationally to support those in Russia, Belarus and Ukraine who oppose, desert or refuse to go to war. At a time when it’s hard for nonviolent activists to know what to do in response to Russia’s war, it’s great to hear about a campaign we can support.

Lest I not mention taxes, the NY Times had an article about Russian rappers who left their home country and are speaking out against the war.  On Instagram the rapper Face posted, “I don’t plan to return to Russia, to pay taxes there.”

Dear conscientious objectors to military service, today we mark our CO day while war is being waged. 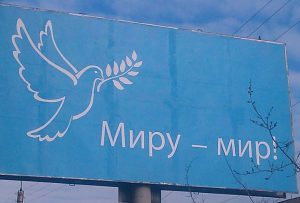 As the war with Ukraine began, the notion of refusing military service in Russia has become especially topical. Before the war, most conscripts and their relatives did not associate military service as conscripts with actual warfare. Conscription appeared to be something akin to a sports camp with elements of military training.

Regardless of their political views, the healthy feeling of fear of participating in warfare in the territory of a foreign country forces people to file appeals for alternative civilian service and to protect their right not to serve in the army by other means.

For some of the objectors to military service, the chance to specify in their application that they object to Russia’s war in Ukraine is important. This is a legal form of expressing one’s disagreement directly to the representatives of state authorities—a matter of moral significance.

In the course of the months of warfare, we have witnessed a totally new phenomenon: cases in which professional soldiers refuse to participate in the special operation[*] and demand to terminate their contracts. We wish to express our special gratitude to those soldiers and police officers who had the courage to refuse to kill and die in a foreign land, who refused to participate in the special operation.

Today, when many people apprehend the introduction of partial of full [military] mobilisation in Russia, it is precisely the right to conscientious objection to military service that offers them support.

The Movement of Conscientious Objectors in Russia expresses its solidarity with all those who oppose war, with everyone who stands against the act of aggression. We wish and pray, with all our might, for Ukraine to survive the assault and retain its independence.

[* WRI note: “The special operation” is Russia’s ongoing attack on Ukraine; formally, it is not a war, but a “special operation”, and is being referred to as such in official contexts in Russia]

— Posted by Ruth Benn, who could not seem to get her monthly blog written
last week but eventually realized the statement above might be more worthy.