For the past 17 years there has been a local tradition of singing holiday songs with a distinctively antiwar theme. Celia’s Yuletide Express makes stops throughout the St. Louis area to bring merriment and joy to union halls, neighborhood associations, bars, and public transit stops. While the past two seasons have been adapted to the times you can read a previous blog post with a videos of a somewhat unique inclusion of Black Sabbath’s War Pigs (watch here with commentary) that has become a holiday favorite.

Last year at Christmas I had a dream come true. Over the years, I had requested that Stevie Wonder’s “Someday at Christmas” be included in the peace-oriented songs. Last year, the conductor Celia included the song in the repertoire.  I began the push after seeing a tweet in December 2014, which included the song along with images of the Ferguson Uprising. On the week of Thanksgiving that year, charges against Ferguson police officer Darren Wilson for the killing of Mike Brown Jr. were dropped.

There was a powerful montage of photos that had become known world wide of the increasingly militarized police in the U.S. with the powerful lyrics of Wonder painting a picture of a different world. Many of the weapons of war were “hand me downs” from the excess spending of taxpayers to the Pentagon that are diverted through the 1033 program. 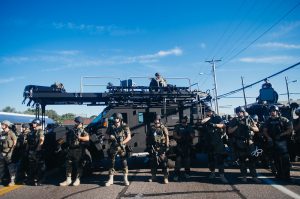 These dark days of the year have often been a time of reflection, taking stock, looking back on the previous year, envisioning what it is that we desire to take root in the coming Spring, and nourishing those dreams in the depths of winter. It is interesting that there have been a heavy concentration of festivals at this time of the year throughout human history amongst many cultures.

While some of the traditions vary, many seem to trace back to the tradition of Saturnalia, a Roman festival that attempted to embody the “Golden Age” of the mythical rule of Saturn (a bonus track of Stevie antiwar track on Saturn).  The story goes that it was a period of much happiness based on the abundance of the land where people did not have to labor; there was no distinction between “bond and slave.”

During the holiday, work in all its forms was suspended and no declaration of war could be made. While many of the festivals of the Roman era were specific to particular locations, Saturnalia was practiced Empire-wide within many households and communities and eventually adapted into modern day traditions. 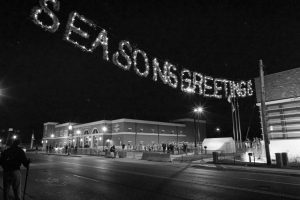 We witness these age old traditions influencing our current celebrations of eating, drinking, singing, dancing, and storytelling. These times seem to require being adaptable, but the hope is that you can find like minded people who share the deepest longings that are experienced in the depths of winter and to make them manifest. Much gratitude to all of you who put into action our collective desire for peace in our world!

Someday at Christmas by Stevie Wonder

One warm December our hearts will see

A world where men are free

Someday at Christmas there’ll be no wars

When we have learned what Christmas is for

When we have found what life’s really worth

There’ll be peace on earth

Someday all our dreams will come to be

Someday in a world where men are free

With no hungry children, no empty hand

Our world where people care

Whoa, someday at Christmas there’ll be no tears

When all men are equal and no man has fears

One shinning moment one prayer away

From our world today

Someday all our dreams will come to be

Someday in a world where men are free

Someday at Christmas man will not fail

Hate will be gone and love will prevail

Someday a new world that we can start

With hope in every heart, yeah

(Someday in a world where men are free)