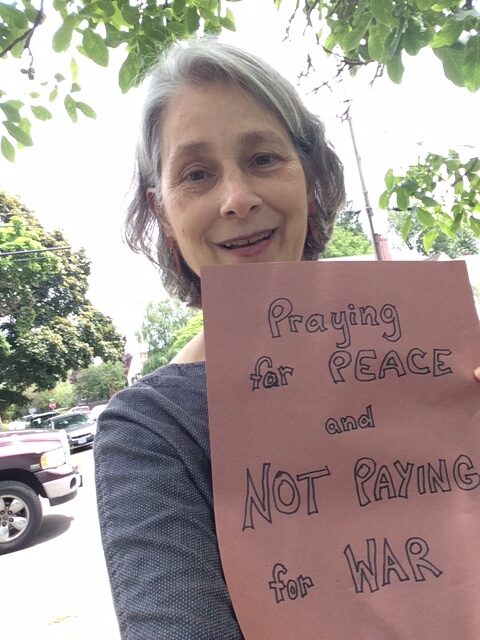 Tax Day, April 15, has become one of my favorite annual events. It is a day of peacemaker empowerment. I smile as I write checks and send online donations to support peace and justice organizations that I care about. I hum on my way to mail the United States Treasury a payment that covers only 53% of my tax assessment, and post a letter to the President in the White House telling him what I am doing and why I choose not to pay for war. (Text of my letter is below.) I enjoy standing with other peacemakers at a sidewalk demonstration to sing prayers for peace, and voice outrage at the nearly $1,000 billion dollars allocated for the military in the U.S. national budget.

From my U.S. American father who refused military service and French mother who survived World War 2, I learned at a young age that peacemaking is important and war is horrific. My French uncle, in his nineties, retold with horror that in December 1944, the U.S. military burned down the family home. Thirty years after the fact, I heard my French grandmother cry over her adolescent son who was killed in a war accident. And then I remembered the courage of my father who as a U.S. high school student braved the taunts of his peers to choose not to fight for Uncle Sam, but to serve the nation as a Conscientious Objector. His post-war volunteer stint took him to my mother’s community in France where he participated in rebuilding what war had destroyed.

Having been nurtured in a peace church community, I was troubled for many years about my financial participation in war-making. During my college student days, my housemates and I resisted the war tax that was levied on our phone bill. I joined numerous peace groups and public demonstrations over the years. As a parent of three young children, I struggled to model peaceful resolution of conflict at home. Later, in my work as a pastor I taught peace and non-violence.

“If you pray for peace, why pay for war?” is the slogan that finally convinced me to become a war tax resister ten years ago. I wanted to follow my peace prayers with action. Earlier, I had met Marian Franz, executive director of National Campaign for a Peace Tax Fund (peacetaxfund.org), who lobbied the U.S. Congress, promoting the religious freedom of people of faith to oppose war taxes. I was also fortunate to meet up with a local group of war tax resisters with the National War Tax Resisters Coordinating Committee (NWTRCC) in New York City, who made a presentation in my church, Manhattan Mennonite Fellowship. I decided my moment for action had come. NWTRCC counselors provided expert guidance for me as I waded with some trepidation into the waters of this new venture. They answered my questions and assured me that the many experienced war tax resisters in the network would provide support along the way.

Letter after letter from the Internal Revenue Service (IRS) began to show up in my mailbox. I came to see that I would have a number of choices about how to respond. I learned that the IRS would attempt to collect money from me and that I could again decide whether I wanted to resist that collection. When they scooped out my bank account, levied my wages, and skimmed off my Social Security check, I chose to acquiesce.

My prayers for peace continue. And now more than ever, it is important to me that I act out my prayers by saying “NO” to paying for war.

Text of my letter to the White House:
Greetings President TRUMP:

Today I am sending 47% of my tax dollars to organizations that work to build peace locally and globally. As a war tax resister, I have decided to publicly register my opposition to military spending. I have chosen to redirect the amount of my tax that would have been spent on the U.S. military budget, spending it instead for peace building.

As a long-time member and a pastor of the Mennonite Church USA, I have been active in praying and working for peace for many years. Resisting war taxes is an expression of my faith in the God of love and hope and redemption.

Historically, Mennonites, Quakers, Church of the Brethren, and other people of conscience have maintained a stance of conscientious objection to participation in war in any form. This has been most evident in our refusal to join military forces. Support for the military conflicts with our Christian peace testimony.

Thank you for your part in the good things that the United States government is doing with the other 53% of my tax dollars.