We woke up to black smoky air the day after Labor Day 2020. It was challenging to breathe outside, even with a N95 mask. We could not see the sun. The air quality index was over 500— the extremely hazardous range. Our beautiful Oregon was burning up. The trails we love hiking and the places we love camping and many families’ homes were burning. All over the state fires were burning out of control, including along a major highway following the McKenzie River, only 10 miles from Eugene, Oregon, where I live. In some cases, folks had less than a 15-minute warning to abandon their homes.

Until the wildfires—though we were in the COVID shutdown—we could enjoy hanging out in our yard and taking walks. Suddenly, we were confined to our homes. We had to keep all the windows and doors shut and were sharing air filters with friends to keep the air quality livable inside our homes. People without homes were not as lucky. Due to the pandemic, they weren’t allowed inside public buildings to breathe fresh air, and though a few shelters were open, there was not enough room for everyone who needed shelter from the bad air. We were all scared and glued to the news. We learned the fires might keep burning until the fall rains and winter snow started, and due to global warming the rains might not start for months.

We all packed go bags and had them near our doors or in our cars. We took pictures of family pictures, because there isn’t much room in a car for all the things you might want to save if the fires continued to spread. And we wondered, if we had to evacuate, where would we go? There were traffic jams everywhere as people fled the poor air quality. 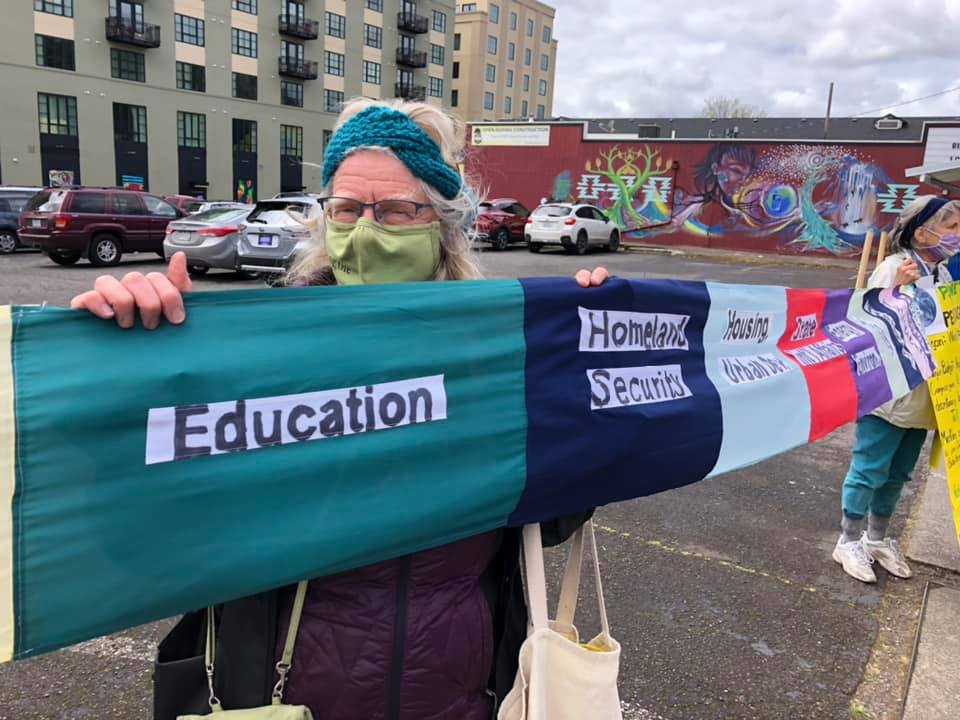 One friend who lives in the forest woke up to his house surrounded by flames. Knowing he was on an evacuation alert, he had put things near the door that he planned to take if the fire came close to his house. Sure enough, as he slept the winds whipped up the fires. All he was able to do was rush out the door past his collected belongings, jump in his car and drive through raging bright orange and yellow flames and large darting embers from both sides of the road. He made it out. One of the lucky ones, eleven others did not.

Low humidity and unusually high winds from the east fanned fires already started by lightning, campfires, and electrical wires blown down by the winds. But the major culprit in this historic wildfire season on the West Coast was climate change.

The summer of 2020, an extremely hot, dry one, was precipitated by decades of drought caused by rising world temperatures. The result was massive, sobering destruction in rural Oregon. And what might be the world’s largest emitter of CO2 and therefore the largest driver of climate change? The U.S. military.

Though firefighters worked bravely to put out fires, a bloated military budget funneled off tax money that could have been better spent to hire more firefighters. Many small-town fire departments are run by volunteers. Firefighters stationed in every town who are paid a living wage would be a much better use of our taxes. Unfortunately, Biden is asking for an increase to the military budget, including an increase for more nuclear weapons!

Now those fires are out and eventually the forests will recover, but many magical hiking trails and camping areas have been destroyed. 4,000 homes were lost and Oregon’s homeless population, which is already very large, grew by thousands.

Now it is summer 2021. Usually our autumns, winters, and springs have lots of rain, and I wear my rain gear most days, I hardly wore my rain gear last winter and it barely rained all spring. My neighbors and I are worried about some of our trees and have begun to water them regularly in a hope to save them, something we have never done before.

We already have fires to the North, East, and South of us and occasionally I smell smoke in the air here in Eugene. People closer to the fires have already had to evacuate. We have all begun obsessively checking the air quality and so far it has crept into the moderate range somedays, depending on how the air is blowing. Though I love the cool breeze we get in the evenings, I worry it will whip up one of the fires and increase the spreading.

A few weeks ago, we had temperatures over 110, higher than has ever been recorded in this area. Many elderly people and people with disabilities died. We were lucky to have the resources to escape to the coast, but not everyone is so lucky and we did feel guilty about increasing our carbon footprint. We returned home late at night, and it was still over 100 degrees. And still people deny that there is a climate catastrophe.

I want my tax dollars to provide for food and homes for all; comprehensive health care that includes dental, hearing, vision, and mental health care for all who need it. Free, excellent childcare and education should be provided for all who need it, children and adults. Finally, I want my tax dollars going toward ensuring a sustainable future for our planet, toward real solutions to the climate crisis.

[Return to List of Headlines] [Return to NWTRCC home ]