As politicians bandy about the future with so much at stake, there was a collective sigh of relief with the end of the Trump administration. After the past four years, many of us have been on heightened alert and working to protect the most basic of human dignity. The toll has been tremendous especially over the past year as the pandemic has laid bare the systemic injustices that have been woven into the bedrock of this nation. 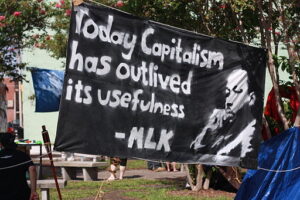 Some people couch their moral and ethical opposition to injustice and war in religious and spiritual terminology.  Reverend Dr. Martin King Jr. this past weekend in what would have been his 92nd Birthday provided a time of assessment for this country of where we have been and where we envision going. In Beyond Vietnam, Dr. King clearly articulated the most pressing issues in our society.

In speaking about the radical revolution of values needed in this country, Dr. King stated “we must rapidly begin the shift from a thing-oriented society to a person-oriented society. When machines and computers, profit motives and property rights, are considered more important than people, the giant triplets of racism, extreme materialism, and militarism are incapable of being conquered.”   There are very different images that are conveyed in Dr. King’s words and that which was conveyed at the Capital two weeks earlier. The Poor People’s campaign has a common cadence  that we all have been hurting for far too long. That pain was evident in the many current, former or hopeful members of the military who stormed the capital two weeks earlier with about one in five people identified with ties to the military.

Dr. King stated, “A true revolution of values will lay hand on the world order and say of war, ‘This way of settling differences is not just.’ This business of burning human beings with napalm, of filling our nation’s homes with orphans and widows, of injecting poisonous drugs of hate into the veins of peoples normally humane, of sending men home from dark and bloody battlefields physically handicapped and psychologically deranged, cannot be reconciled with wisdom, justice, and love. A nation that continues year after year to spend more money on military defense than on programs of social uplift is approaching spiritual death.” Dr. King often expressed his belief there is such a thing as being too late also shared “Our only hope today lies in our ability to recapture the revolutionary spirit and go out into a sometimes hostile world declaring eternal hostility to poverty, racism, and militarism.”

Reverend Barber and others have taken up the torch of the Poor People’s Campaign emphasizing the need to have a shift in values; have outlined a 14 point plan for the new administration’s first 100 days. He stated  “We must have a Third Reconstruction. We must address the five interlocking injustices of systemic racism, poverty, ecological devastation/denial of healthcare, the war economy, and the false moral narrative of religious nationalism.” Rev. Barber was one of many religious leaders invited by the Biden administration on the first day in office who were critical of US polices and simplistic calls for unity.

Not paying for war is one of the the things we can do to address militarism especially here in the U.S.  Part of what attracted me to war tax resistance was the lives and spirits of those who were war tax resisters. While visiting fellow war tax resisters years earlier, I scribbled down the words of May Sarton that were shared to them by war tax resister Juanita Nelson. “We convert, if we do at all by being something irresistible, not by demanding something impossible.”

I hope that spirit is conveyed when I participate in a War Tax Resistance 101 session and action celebrating the UN Treaty on the Prohibition of Nuclear Weapons; I am certain it will be communicated by the panelists on Sunday at NWTRCC’s to kick off tax season. Five war tax resisters will be sharing their stories about what got them involved. Join us on Facebook Live or view the video later and perhaps we can “catch courage from each other” as panelist Kathy Kelly often says.