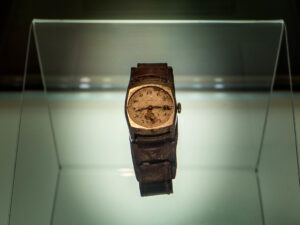 Watch at Hiroshima Peace Museum of the moment the atomic bomb was dropped. Photo from Flickr.

At the start of 2020, the Doomsday Clock was moved to 100 Seconds to Midnight. This is the closest the clock has been to a nuclear catastrophe (midnight) since its inception in 1947 as a project of the Bulletin of Atomic Scientists. When the hands were moved in January, three reasons were cited: (1) decrease in regulation of nuclear weapons, (2) climate change, and (3) increase in cyber-based disinformation. It appears that concerns in these areas have only increased as the year has progressed.

It was 75 years ago at 8:15 in the morning on August 6th, when the U.S. warplane Enola Gay released “Little Boy,” the first atomic weapon, on the people of  Hiroshima. Three days later Nagaski was bombed; 200,000 were killed instantly within those 3 days. The survivors, the hibakusha, were the only eyewitnesses of the bombings and their  lives have been dramatically impacted by those fateful moments.

Many have advocated for decades for nuclear disarmament so that no other human being would have to witness once again the horrors of an atomic weapon. As the number of survivors decreases, their sense of urgency in sharing their stories with younger generations increases. The L.A. Times profiled some of the hibakusha prior to the 75th anniversary of the bombing and how COVID-19 has impacted the annual commemoration:

“For the first time in over a decade, Keiko Ogura won’t provide English guided tours of Hiroshima’s Peace Park. 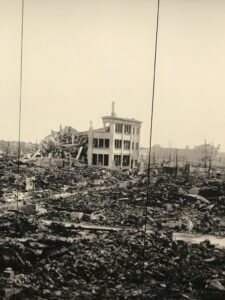 Remnants after the bombing of Hiroshima. Photo from Flickr.

“Ogura was 8 when she saw the searingly bright flash outside her house, about 1.2 miles from groundzero. Knocked flat, she was woken by her little brother’s wails. The rubble of their house was burning.

“Crowds of people with severe burns, their hair charred into curls, headed to a shrine near her home, grunting and asking for water. Two people dropped dead after she gave them water, a scene that haunted her for years. She blamed herself for surviving when so many others died.

“Ogura’s relatives and friends told her to hide her status as a hibakusha or nobody would marry her. She kept her past to herself for decades until her husband, a peace activist, died and she decided to continue his efforts. She set up a group of interpreters for peace.

“Her relatives don’t want her to mention them in her speeches. ‘Why? Because people are still suffering,’ Ogura, 83, said in a recent online briefing. ‘The impact of radiation, the fear of it and the suffering were not just felt during the moment of the blast—we still live with it today.’

“Survivors are frustrated by their inability to see a nuclear-free world in their lifetime, and by Japan’s refusal to sign or ratify a nuclear weapons-ban treaty enacted in 2017. ‘But no matter how small, we must pursue our efforts,’ Ogura said. ‘I will keep talking as long as I live.'”

While some hibakusha may feel that “We are not screaming loud enough for the world to hear” their pleas for disarmament, world leaders have been paying lip service to disarmament while racing to create a new generation of nuclear weapons. Many world leaders have used “the bomb” as a central part of their military strategy based on deterrence in the past but are now shifting toward building more usable nuclear weapons even with the New START treaty in place since 2010. Both the US and Russia have nuclear weapons as a central part of future military planning while China is catching up with the expansion of their  air, land, and sea based nuclear weapons program.

By some estimates, U.S. taxpayers have spent $9.5 trillion on the nuclear weapons programs between 1940 and 1996. It is estimated that over the next 30 years the U.S. is likely to spend up to $2 trillion as it renovates its nuclear programs. 75 years after the first bombs were tested in Nevada and then dropped on civilians in Japan, world leaders are wanting to invest their country’s resources into a new, more powerful forms of destruction even while their citizens are experiencing  economic devastation resulting in death and destruction.

On what would under normal times be a significant day of commemoration—the horrific loss of life from the atomic bombs—a Guardian article takes note of the “eerie silence” on this 75th anniversary:

“Heightened international tensions and collapsing arms-control regimes only partly explain the accelerating pace of nuclear rearmament. Resurgent nationalism, authoritarian rightwing populism, revived or new territorial rivalries (as in space), the bypassing of the UN and multilateral institutions, and a shifting economic and geopolitical power balance are all aggravating factors. But so, too, is amnesia.”

We know that the people of Hiroshima and Nagaski were not given warning of the nuclear bombs dropped on them, but the survivors are trying to warn us. Will we hear their urgent pleas?