A recent headline, Cost to taxpayers to clean up nuke waste jumps $100 billion in a year brought home the tragedy of the nuclear weapons legacy. NBC reported that 80% of the increase was related to the Hanford site in Washington state where the plutonium was processed for nuclear weapons during the Cold War. David Trimble, director of the Government Accountability Office’s Natural Resources and Environmental team stated “We believe the number is growing and is understated.”  The projected timeline for clean up at this site is at least 50 years. Hanford is one of 75 sites in 35 states contaminated with nuclear weapons waste throughout the country.

It was just a few days before that the Bulletin of Atomic Scientists released  their annual Doomsday Clock- remaining at two minutes to midnight.  Vox reported We’re playing Russian roulette with humanity.  The Bulletin of Atomic Scientists included the effects of climate change in their predictions for the Doomsday clock  “These major threats- nuclear weapons and climate change- were exacerbated this past year  by the increased use of information warfare to undermine democracy around the world, amplifying risk from these and other threats and putting the future of civilization in extraordinary danger.”  It seems that they got at some of the intersectionality of nuclear weapons  and the impact upon people in this modern era. They call it the “new abnormal.” 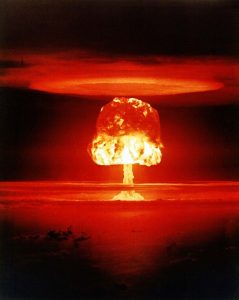 And all of this was before the US pulled out of the Intermediate- Range Nuclear Forces(INF) Treaty. Many are concerned that this may lead to a new nuclear arms race which it is apparent there is No winner in a new arms race.   It  was reported that within hours of the US pulling out of the INF, the US, Russia and France began testing intermediate range nuclear capable missiles.

While the concern of a new nuclear arms race is alarming, the reality that we have not found solutions to the original nuclear weapons waste is staggering. The situation at the Hanford site is a telling example of how the US has mishandled the clean up of nuclear weapons waste. This aspect of the Manhattan Project began at the  586 square mile site in 1943 and has already received over $170 billion in investment to clean up the site as reported by Newsweek.  Some believe that the most challenging work still awaits at this site.

Still not cleaned up are 56 million gallons of what the DOE’s inspector general has described as “hazardous and highly radioactive waste.” An additional obstacle is Trump’s proposal to reclassify radioactive waste from nuclear weapons waste to lower level so clean up is cheaper and easier.  The change in the classification could reduce the clean up costs by $40 billion for all the nuclear weapon sites in the US.  Further  complicating the clean up at Hanford is the fact that the company conducting the clean up, Bechtel has also been awarded government contracts to assist in the production of new nuclear weapons.  Bechtel has been awarded contracts to disassemble and modernize nuclear weapons in Tennessee and Texas.  Despite going over budget, Bechtel has been awarded bonuses for “cost saving measures“.

Similar to the Pentagon budget where wars are externalized to future generations, the future budget of  nuclear weapons waste from over 75 years ago is pushed into the future. We are not talking about the hidden costs of war. We seem to manipulate the true costs of war, hence public perception of how much it is really costing us and allowing the public to continue to pay for it. Meanwhile our communities continue to be poisoned by these wastes and we continue on the path for more weapons that create destruction not only from their toxic legacy but also from the resources that they divert from our communities real needs.