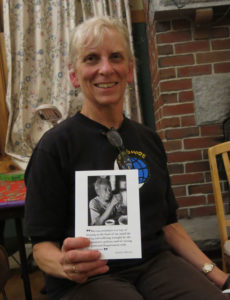 Ruth Benn holds a greeting card with a picture of Juanita Nelson on it.

Change is coming for NWTRCC and for me. After nearly 15 years as NWTRCC Coordinator, I am planning to end my tenure at the May 2018 gathering in Los Angeles. Our November meeting in Massachusetts established a hiring committee. They are laying out a timeline for advertising (see the insert in this issue!) and the process of seeking a new Coordinator.

I took over from Mary Loehr at the wonderful conference in Santa Rosa, California, in May 2003. When I came to NWTRCC I had already been involved in war tax resistance for a couple decades, after learning about it as an intern with the American Friends Service Committee in Western Massachusetts. Pioneer Valley War Tax Resistance was the active group in the area, and who could have better inspirations than Wally and Juanita Nelson. Who could resist resisting after meeting them!

Eventually I landed on the staff of War Resisters League, and coordinating the war tax resistance program there became part of my job. I’ve been producing the annual “Where Your Income Taxes Really Go” flyer since 1987 both as a staff person and as a volunteer. I’m still active with the New York City WRL group. War tax resistance is part of our local organizing, so I’m hardly leaving this work behind — just this particular job.

NWTRCC just reached its 35th anniversary. That really is something quite remarkable for a peace group that organizes on an issue that is even at the fringe of the peace movement. NWTRCC has had great people in the Coordinator position over all those years, each of whom has contributed to the longevity of this group. I think much of that has to do with the inherent frugality of war tax resisters, the benefit we all feel from having a support organization, and the maintenance of a network of local activists who take responsibility to keep the organization going and not just rely on national staff.

At the same time, our local groups are getting smaller and are less able to support this coalition financially. We all see the need to bring in younger people, and the younger activists who’ve joined us already bring with them some new ways of talking about war and the issues of the day. I think NWTRCC is in pretty good shape right now, and it seems like a good time to make a change and bring in some new energy to move WTR into the future. I’ve also got some other work and dangling projects that need my attention, and it’s hard to get to those with the NWTRCC office in my home and the knowledge that there is always something I could or should be doing for NWTRCC.

Besides my impending departure, there are some other changes coming:

The one-year Field Organizer position ends December 31, 2017. In addition, Sam Koplinka-Loehr chose to move on to other things and not continue as a paid consultant for NWTRCC, thus prompting some other shifts in consultant jobs.
Erica Leigh will take over editing this newsletter, along with overseeing the weekly online blog and literature production as the newly designated Communications Consultant. The new budget includes funds for a 5-hour per week Social Media Consultant, which we will be looking to fill.
The new Coordinator will be asked to do more field organizing and give fundraising more time and attention.

It’s been wonderful to meet and be in touch with so many of you around the country — and internationally — over the past 15 years. I have felt so lucky and honored to be able to get paid for work with goals in which I deeply believe. I just hope we can reach those goals one day!

This is not goodbye. You are likely to hear more from me before my tenure ends in May (and maybe even after that!).