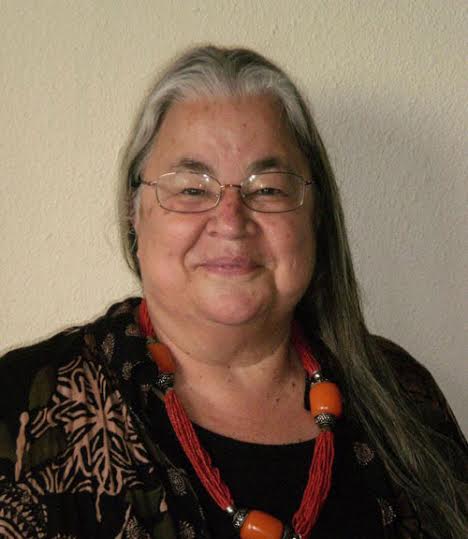 I am an “assimilated” Indian supporting Northern California Native issues in Napa County, about 50 miles north of San Francisco, where I have lived since 1972. It’s a lovely place to have my home and family! I am a masseuse and hypnotherapist (since 1986) with a background in home births and organic gardening. In 1992 I was asked to reorganize Suscol Intertribal Council a community based organization focused on protecting Human Rights for Indigenous peoples of North America and preserving indigenous culture. Since 1995, I’ve been involved in international human rights and water and land issues locally and globally. My life vision was never to feed into the military-industrial complex.As a young child I realized I was a dream walker able to move between the worlds of waking and dream states. This gift enables me to work beyond the physical world in the etheric and astral planes. Since my heritage as a mixed blood (Spanish-Indian) female was culturally sensitive, my family respected my intuitive gifts and allowed me to explore this within the household, but not outside the home or ever to discuss it with strangers. Just recently I have begun to talk about this side of myself in public arenas, as it has become a more broadly accepted vocabulary. My dreams have guided me, my friends, my clients in many decisions and adventures.

Born as the fourth child and second twin in a sibling group of ten has shaped my identity in a group or “us consciousness.” I grew up in Albuquerque, New Mexico, in an adobe house that my father and uncles constructed. Our family moved to Orange County, California, in 1958, fulfilling my parents’ dream to live by the ocean, as well as being more urbanized and mainstream.

I knew I was different from most folks around me by the time I was 11 years old. I’m glad I didn’t wait for society to catch up with me. As a dream walker since a very young age I was able to discern an individuated path towards the common good and towards higher evolution. I attended a Catholic High School with teachers who taught us to question the status quo and come to “faith” via intellect rather than blindly.

It was then, in 1968, that I began to understand that the U.S. government’s actions in Viet Nam were part of this “military-industrial complex.” I put in a lot of thought about not feeding this monster and decided then I would work not just pray for peace. I began to support draft resisters and became a draft counselor after a training by the antiwar movement based in Los Angeles. After moving to San Francisco in 1970, I joined marches, encouraged young men to avoid the draft, and helped set up safe houses. After the mandatory draft was ended and the U.S. exited Viet Nam, I began a 16-month sojourn across Western Europe and the Middle East. It was then I began to see myself as an integral part of the world beyond nationalism.

I returned to the U.S., realizing work was “here, not out there.” I followed my personal commitment to low income lifestyle and devoted time, labor, heart, and thoughts to world peace. The peace movement of the early 1970s inspired me to not just work against what we didn’t like but towards what we wanted in the world around us. What a journey that has been.

I became an organic farmer and traded my vegetables until I was asked to raise and supply organic produce for a few popular local restaurants. Farming came naturally to me as my grandfather was a chili farmer in New Mexico, and I continue to explore permaculture on a 23-acre land project. After having my two daughters by home birth, I became a midwife and helped bring over 100 new lives into the world. After three years of being on call 24 hours a day, I became a certified massage therapist and continue this practice today, between many volunteer commitments. As a self-employed worker I found I could easily divert my small income to life-giving tasks, including a focus on women’s rights that led to being a delegate to the 1995 UN world conference on women in Beijing and work with the Women’s Intercultural Network, connecting women and girls globally. This led to several trips into war zones in Afghanistan, East Africa, Ecuador, Palestine and South Korea, often as a delegate exploring root causes of conflicts — with costs paid for by U.S. State Department. Funny!

To this day I have never filed or paid income taxes. Once for a short period of time I was receiving letters from IRS, but just returned them unopened. Once, with a large group of friends around, the postman was attempting to deliver a letter from IRS that I refused to sign for.

I joined Northern California War Tax Resistance in the mid-1980s and spoke at a WTR conference in Berkeley in 1991 on a panel about tax diversion lifestyles. I was the only panelist who had children and lived a fairly public life, but I am not “out” as a war tax resister. I found long ago that it makes most folks nervous. At that conference I met Juanita Nelson, who said I was only doing half my work; until I could share my journey my work was only half done. I have spoken out at peace rallies, at United Nations conferences, but WTR is not “my title” on panels and presentations. I say I have devoted my life to human rights work, social justice issues, and creating a dream that does not yet exist on this earth.

Charlie Toledo is Director of the Suscol Intertribal Council, suscolcouncil.org, and serves as a board member or volunteer for a long list of other organizations. Regarding this profile she said, “So there is my story with lots of details left out. Thanks for opportunity to do my whole work.”