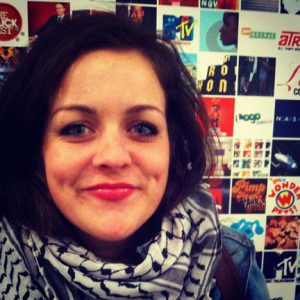 Sarah Mueller is a first year war tax resister. She lives in Philadelphia and is actively involved in justice-centric community film programming, neighborhood gardening initiatives, as well as, organizing for racial justice.

Sam: As someone who is new to war tax resistance, what is exciting to you about this form of resistance?

Sarah: I first learned of war tax resistance many years ago through my church, Circle of Hope, a Brethren in Christ Church of the Mennonite/Quaker world. I was very intrigued because of the practical nature of its resistance: “We are opposed to war and militarization, therefore we will not pay for it!” That planted the seed years ago. In recent years, in the wake of Black Lives Matter and other organizing around police brutality, more and more people were talking about the correlation between Washington’s war machine and the over-policing and the killing of black and brown people in our city streets. At some point, I realized that I cannot pay for this anymore. I had already done a lot of marching in the streets and wanted to continue to do that as I was able, but this felt like the next tangible step for me. I feel so fed up. My money will not go to the killing and the over-policing of black and brown communities — the communities that I live amongst, folks who are my family and friends.

Growing up, what led you to be involved in these struggles?

I come from Lancaster County. Growing up in an upper middle class family, in a very “safe protected little bubble,” everything was very homogeneous and white. That was my life. It was very “safe.” In high school, I felt very drawn to the city of Philadelphia because of the amount of different people. In my naive mind, I thought city life was everyone coexisting without tension, just like Sesame Street. So, in the summer of 2002, I moved here for college. After I graduated, I got involved in community education working in North Philly. I came into contact with formerly incarcerated youth and began to hear more and more about their time behind bars and their struggles to find jobs after, as well as the gross cycles of poverty. I began to struggle with my own privilege. At some point, I needed to move beyond the guilt. I began to move towards the idea of using my privilege, whether it’s my education or whether it is my access to resources like money and time.

I’ve learned so much, and it has forever changed my life, friends, and relationships. The urge to do more persisted. Becoming awake has a snowballing or domino effect. The more that you become aware of the ways of the world, the more you see how it is all interconnected.

I’ve always known that one person cannot change the world. But there is so much power in community when we grow and bind together. I look at my gardening work that way, as a reconciliatory peacemaking activity. It re-engages people with how to grow their own food, with skillsets and wisdoms that were robbed from them. I am very thankful and honored to do this work.

Something that my church and father taught me is that a life in active faith is a life being awake to the world, that it’s all cut of one whole cloth. The world, and American culture particularly, wants us to silo all aspects of our lives. Whether it’s our sexuality and gender, our finances, who we associate with, our paid work, or our organizing and activism—I am learning that this is one whole life.

For me, becoming a war tax resister, is all part of that. I’m trying to figure out how all of my ideas, about how the world is supposed to work, can all play in together. My money, your money, is inherently tied up in the system. We can’t ever fully avoid that, but we can make a serious point and that is that we don’t have to pay for this. We don’t have to pay for perpetual war, for over-policing and murder here and abroad, and no one can force us to.

How is tax resistance a part of your community?

I have built the idea of reparations into my personal budget. It is wildly life-giving. As a white person, to return or re-direct money and resources to Black and Brown communities is very freeing. Over the years, I’ve learned to hold my money loosely, because it’s not really my money.

When you hold money and you begin to assess the privilege you have and were given in terms of access, you realize that the money was never really yours in the first place. It is all connected to white supremacy, white heritage, and the perpetuation of white control of land. You realize you have way more to give than you first realized. We can give out of however much or little we possess. There’s lots out there. It’s exciting to see how much we can do.

This past month, there was an incredible campaign, called Mama’s Bailout Day, initiated by several racial justice and criminal justice reform organizations. The local Philly campaign raised over $58,000! There is so much power in that Philadelphia came together to bail out all these women and femmes enabling them to spend Mother’s Day with their kids and families. That’s a big deal! You begin to realize that all the lies that the government and white America has perpetuated are based on a scarcity mentality, always saying “there is not enough to go around.” But I have realized in my own journey, and am learning more so every day, that there is so much.