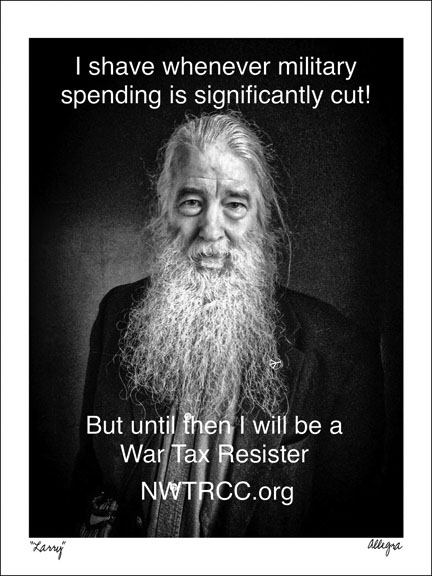 I have happily just passed the ten-month mark of my first year of massive resistance. I mark this new beginning of my life on June 11, 2016, with the death of my father and with my commitment to redirect much of my inheritance to make a better world. Dad left me $1 million with instructions to distribute about half of it to grandchildren and great-grandchildren and special others. I did that and set to work on my half. My commitment to civil disobedience in honor of my mother, who became a criminal for peace in her later years, is acted out in my case with war tax resistance. I am resisting the $128,005 I owe in federal income tax for 2016, because nearly 50% of anything I do pay will go for war or preparation for war. I cannot in good conscience pay for war. I have donated more than that amount to meet human needs internationally and nationally and locally.

To honor my father and mother I am trying to do as they did many times in their lives in trying to directly help the less fortunate. They were brave and compassionate by giving money and offering a place to stay in their home and loaning other personal goods. They found that helping others was not always free of risk. People who were ill and without resources sometimes took advantage of them. But my parents knew that they had much and others had little. Since I live in the internet age I have had a much broader range of people in need. While I have given to many charities I have also tried in a very small way to help some individuals in Haiti and Kenya and Uganda who had little compared to me who had been left with so much by my father. My effort with individuals has taught me a lot about the desperation of poverty. I have often remembered my first job out of college working with the poor in Pontiac, Michigan. Back then I came to the conclusion that what the poor need most is money. So when I found the international charity GiveDirectly that gives cash to the extremely impoverished in East Africa, I knew I had found an organization that I wanted to support significantly. I have done that in the past year as well as supporting many other charitable organizations.

My mother once spent 30 days in jail for merely “crossing the line” at a plant in Michigan that produced a part of a missile. What she learned from that experience was that the women who shared her jail cell were poor and black. She learned that the justice system needed reform. The government learned and continues to learn that the biggest result of putting peace and justice people in jail is that they are creating people who diligently work to change the system.

I do not know what the justice system will do when I refuse to pay my federal taxes in April. I am a little bit scared of what they might do, just as I was scared in 1985 when they took me to court. But sometimes as my parents knew and as they taught me by their example you have to do what you have to do because it is clearly and conscientiously the right thing to do.

[There’s a newspaper photo] of me and my mother in front of the Federal District Court in Brooklyn in 1985 after I won the IRS case. I am remembering her and my father with pride just as they were proud of me back then.

Larry was a co-coordinator of NWTRCC with Kathy Levine from 1984-86. He has posted many comments and bits of information about this massive resistance on Facebook and the War Tax Resistance listserve. Here are a few updates from those sources:

As some recall I was taken to federal court in the 1980s for refusing to divulge my assets. With legal assistance I won that case due to a good judge and the Fifth amendment. I was prepared to go to jail then and I am now. But I guess I really don’t expect that to happen.

My personal need for support in my WTR action is yet to be determined. It now appears that the IRS has settled into its normal pattern of multiple letters followed eventually by a Notice of Lien. I am determined to up the ante on a more significant government response by pressing my congressman Mr. Goodlatte as well as the IRS. Both of them have offices in downtown Lynchburg. I don’t want to let them quietly ignore me or process me routinely.

I have had a delightful time redirecting my taxes!

A filmmaker in Lynchburg heard about Larry’s redirection and is working on a documentary, The Pacifist, about Larry. You can learn more about that project and consider a donation to help defray the production costs, at facebook.com/thepacifistfilm.