War tax resistance has received more news coverage already this year than in all of 2016. I’m thrilled that we’re being sought out! Many articles are spreading beyond the original source, by being summarized or reblogged on other websites. This is leading to some misinformation that I want to clear up: 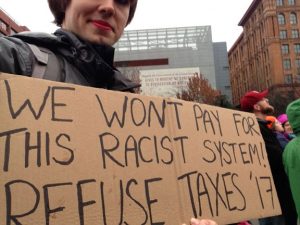 And now, catch up on this year’s best coverage of war tax resistance!

Did we miss any good ones? Let us know in the comments!