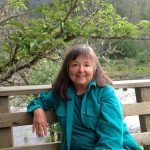 In my 75 years, 30 of which as a war tax resister, I have known of no other time when an economic boycott of the federal government was more crucial. Now more than ever, as a grandmother of three beautiful grandchildren, I fear for the futures of the next generation if our country continues on the destructive path it has been following. I firmly believe that we cannot change our deeply corrupt government by voting alone. I have supported progressive candidates, voted in each election, but over the decades it became crystal clear to me that our national elections are carefully rigged to allow only candidates who support the status quo to be elected. The way Bernie Sanders’ campaign was squelched is a glaring example. The corporate press ignored him, primary voting processes were flawed, legitimate voters in progressive districts were told they were not registered, millions of votes on “provisional” ballots were never counted, etc. Trump ran as an “outsider” and despite his ignorance, bigotry, and delusions of grandeur, got the votes of many millions of disaffected, less educated people who were desperate for change, enough to win the electoral college vote and be sitting in the White House Oval Office today. Only by resisting in every way we can, including, refusing to pay for it, can we hope to turn this evil empire around. This must become a mass movement now.

I have been a practicing massage therapist for over 30 years, while raising two daughters after a divorce. I’ve been an activist since I was a student at University of California Berkeley during the Free Speech Movement in 1964 and protested the Vietnam War and all the wars the U.S. has engaged in since then. I’ve worked for equal rights for women since the early ‘70s and protested nuclear power plants, drone warfare, the Iran Contra drugs for weapons program, U.S. involvement in oppressing Palestinians, fossil fuel companies, clear-cutting our
forests in South Oregon where I’ve lived for 30 years, stopping GMO crops in my county. I’ve been a member of Code Pink and Greenpeace and Peace House in Ashland, Oregon.

For over three decades, I have redirected my owed federal taxes to peace, justice and environmental protection organizations. I also deposited owed taxes in one of the many war tax escrow funds during years when I owed larger amounts. Each year when I sent in my accurately completed federal income tax forms, I enclosed a letter to the IRS explaining that I would be happy to pay my taxes if they would assure me that my money would not be used to pay for wars and nuclear weapons. I also explained that I was using my owed taxes to support local peace organizations. I sent copies of my letters to my representatives in Congress. Now I scrape by on a meager Social Security retirement check and Medicare, so I’m no longer required to file the IRS forms.

I began receiving letters from the IRS after the first year, imposing interest and penalties increasing what I owed. I wrote back each time with copies of my letters stating why I was not paying. After several years, the IRS agents began to call me with their threats. I enjoyed having long conversations with the agents explaining exactly why I was doing this, and even attempting to recruit them to the cause. After a year of these calls, they stopped, and also stopped sending the threatening letters. Had I convinced them? No way to know why they gave up on me.

I made sure that I filled out my W-4 forms listing several allowances, so IRS $ would not be subtracted from each paycheck. I kept only enough in my bank account to pay my monthly bills. I never received threats to take my home or had my wages or bank account garnished. I believe this was due to the understaffing of the IRS collections department, which I understand only goes after about 50% of tax resisters.

I helped organize tax day demonstrations at my local post offices, wrote articles for local papers and newsletters, and I talk with anyone who shows any interest in how and why I do this, to encourage others to join this campaign. The U.S. already spends far more on the military than any other country. At least 50% of federal income tax goes to the military, and an unknown amount to nuclear energy, subsidies to fossil fuel companies, bail-outs for criminal bankers. The U.S. has more prisoners, many in private jails, and disproportionately people of color, than any other nation. Our government builds more prisons than schools. We need to use tax dollars to mediate climate disaster, properly educate our children, provide decent health care to our citizens, repair crumbling infrastructure, and fund a livable retirement income to our elders. All these concerns are about to get much, much worse under the new regime in DC.

Most people I talk to about tax resistance are afraid they will go to jail, or lose their property. It is fairly easy to explain that almost none of the thousands of tax resisters we know of have ever gone to jail for refusal to pay income tax per se. It is far more complicated to discuss the possibilities of losing property, having bank accounts and salaries garnered. This is where NWTRCC information and tax resistance counselors are so important. Without the information and support of NWTRCC, I might never have had the courage to follow my deepest beliefs and become a war tax resister. I hope and pray that the example set by war tax resisters such as myself will encourage millions of people to join this campaign NOW.