Last August was the 70th anniversary of the U.S. atomic bombings of Japan.  As members of the international peace group Global Network,  Alex and I were fortunate to participate in commemoration services in both Hiroshima and Nagasaki.  A year later we traveled a shorter distance to California’s Lawrence Livermore National Laboratory, to stand again with victims of nuclear war.    We were there to float another lantern downstream to honor the dead.   We wanted to hear direct testimony from those who survived the hibakusha.  Rev. Hanaoka, now a retired Bay Area Methodist minister, was just a baby when the bomb exploded above his town, a child when he lost his mother and sister to radiation exposure, and a young man when his brother died at 39 of premature aging.    In his testimony, he told us “it would have been better to have died instantly.”

Daniel Ellsberg, peace activist and Pentagon Papers whistleblower, spoke about the “maniacal “nature of a US foreign policy which refuses to publically claim a “No First Use” policy for nuclear weapons.  What is truly risky is not to guarantee a “no first use”.  When the U.S. does declare this, there will be no need for nuclear weapons at all.  As one U.S.  presidential candidate has chillingly questioned, “If we aren’t going to use them, why do we even have them?”   Ellsberg’s eloquent speech is available online at www.trivalleycares.org, with other recorded speeches and video from Livermore’s Tri-Valley Cares.

Nobel Peace Prize winner Barrack Obama has a golden opportunity to declare a “no first use” policy before he leaves office.   He has been to Hiroshima.   He knows our world will only be secure when nuclear weapons have been abolished.   There are only five countries with nuclear bombs who have not pledged “no first use” and who continue to resist negotiations for the multilateral nuclear disarmament required by the Nuclear Non-Proliferation Treaty of 1968.  Of those countries, the US and Russia possess 90% of the total.  Obama can still break the stalemate and earn that Nobel Prize.  Rumor has it that he might be considering this. 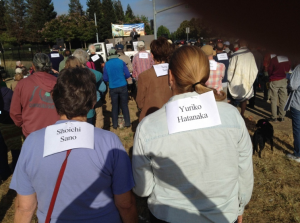 Soon we marched to the western gate where a civil disobedience “die-in” shut it down with the arrests of 45 protestors, including Ellsberg.  Scientists at this nuclear facility are busy developing new “tactical” nuclear weapons with “upgraded” features.    Washington plans spend an unimaginable sum of one trillion of our tax dollars over the next 30 years to this stockpile upgrade.

As our megaphone “air raid” siren sounded, we dropped to the pavement to simulate the instant deaths of those near ground zero.  Activists used chalk to outline our bodies with chalk, leaving a reminder of the human shadows left behind after the nuclear explosion.    We will never forget seeing evidence of this in Hiroshima, where human shadows were visibly burned into a river bridge walkway.

Leaving our shadows behind in front of the gate, we left Livermore.   As we passed our rally site, we discovered a repurposed piece of the 1995 WRL Enola Gay poster project we had donated to Tri-Valley Cares when we moved from San Jose to Los Angeles.     We were again encouraged to continue the ongoing struggle for peace, for the redirection of our tax dollars, and for the total abolition of nuclear weapons.