First and foremost, we have just listed our new Field Organizer/Outreach Consultant position on Idealist, New York Craigslist, and our website! We’re looking to build more power among our network affiliates and individual WTRs around the country. This is a temporary position with flexible hours. See the listings for details and application procedures. 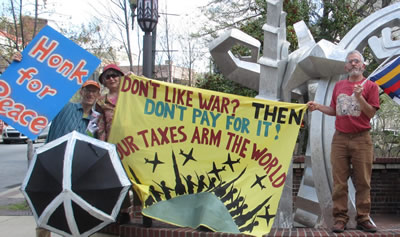 War tax resister Clare Hanrahan has recently released her memoir, The Half-Life of a Free Radical: Growing Up Irish Catholic in Jim Crow Memphis. On her website, she mentions when her family was counted for the 1960 Census:

In the photo Mama is seated, pen in hand, filling out the form. Daddy stands behind her with his ever-present Roi Tan cigar in the hand that rests on her shoulder, and with his other hand he is counting his children.

One of [sic] census questions asked, “Did you work at any time last week?” Mama’s answer was telling:

“I rise every day about 6 a.m. and work about three-fourths of the time until near midnight. That’s about 16 hours a day and times seven for the week.”

…We children then were like a globe of dandelion seeds, barely holding together before being scattered by the wayward winds.

Clare is also the author of several other books, including Jailed for Justice and Conscience and Consequence: A Prison Memoir. 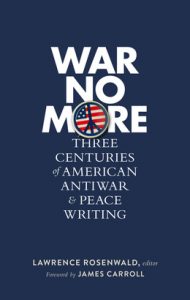 image from Library of America

In an interview for his publisher, Library of America, he said:

The United States has been a warmaking nation for most of its history. Its present military budget is by far the largest in the world. Its psychological character was famously if polemically defined by D. H. Lawrence: “the essential American soul is hard, isolate, stoic, and a killer.” This regardless of what one thinks of particular American wars. So American antiwar writing is directed against a formidable antagonist, namely, the powers of American warmaking—a “predator beast,” as Barbara Ehrenreich puts it, and an idea worked intricately into the fabric of our lives. And being directed against such an antagonist, it has a consistent urgency, a consistent necessity, that antiwar writing in other countries doesn’t always have, and a remarkable vitality and diversity.

Any other good reading by war tax resisters you’ve found lately? Share in the comments.