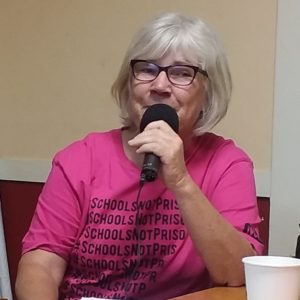 Anne Barron speaking at the May 2018 NWTRCC gathering.

My sister was a war tax resister. She was the first person I knew who actively resisted war and an oppressive government by refusing to fund them. Still, it was hard for me to take that first step, to actually withhold taxes. I’ve always loved taxes; I even campaigned for higher taxation. (Since taxes paid my salary as a public school teacher, you could say I had a direct interest in taxation.)

So it is odd to me now to be on the other side some ten years later, where I withhold 47% of what the IRS tells me is my bill for the USA. I still believe in taxes but after decades of marching against war, after seeing the effects of war on my father, my family and my neighborhood, I’ve finally had to accept my country doesn’t use taxes for the social good but for endless war and domination. That realization did take a while, longer than it should have.

I was on my way to a year-stay in Switzerland when 9/11 happened. I was shocked by the government’s attack on Afghanistan and the follow-up “Shock & Awe” on Baghdad, but none of my Swiss neighbors were. They had warned me the USA would attack; so my education about my country came from foreigners who understood the USA very well. I returned to a New Jersey town where liberals were the majority and an active antiwar group, the Central Jersey Coalition Against Endless war, kept us all on the march. Like peace activists around the world, we marched. And marched. The marches got smaller and the wars got bigger. My moral horror grew as we added more names to the Vietnam Memorial-styled Wall a creative friend made to make visible the horror of the Iraq War. Veterans for Peace refer to the moral injury of war, and I was experiencing it.

There was some inspiring direct action, such as the blockade of a Department of Defense-funded video arcade in Pennsylvania that offered violent games. When I heard about active war tax resisters, I thought “Of course.” My partner at the time was not convinced, and so I finally began my own resistance after our split in 2011. I began war tax resistance as a supporter, sending letters of conscientious objection off with my tax “debt.” A NWTRCC counselor gave me a crash course on ways resisters practice their WTR when I visited the War Resisters League office in New York. I opted to be public about my resistance. I think that provides some protection against the dreaded IRS (my working hypothesis to be proven or not).
Since I made below the taxable income my first year filing taxes singly, my letter stated my intention to begin withholding war taxes. These letters (cc’d everywhere, elected officials and press) usually began:

Dear President Obama,
I have up to now paid my taxes willingly. Fairly collected and distributed taxes are essential to our national security. A nation that shares its wealth and resources for the good of the whole will prosper.

Then I got a job, work that I actually got paid for, work that included benefits, and also required that I complete a W-4. The NWTRCC support and advice was crucial. I used the website resources a lot as I figured out what to do. NWTRCC tells us there is no one way, that each of us has our own needs and circumstances when figuring out the 1-2-3s of our war tax resistance.

Excited and terrified, I withheld 47% of my tax “debt” in 2013. My letters to the IRS, the President, and the press laid out my conscientious objection to war:

Sure enough, I received the IRS letter demanding full payment. I again declined, copying everyone I could think of. It turns out the IRS has an ombudsman to help the public with tax problems, so I also wrote to that office to claim my right as a conscientious objector.

I did receive an intent-to-levy letter from the IRS. Since I don’t have much, I wasn’t worried about that. I am still a little worried about being jailed, but since my current tax “debt” is much less than all the corporations who continue to withhold their taxes and they haven’t been arrested, I think I’m OK. And I can depend on the strength and resources of the NWTRCC network (i.e., the War Tax Resisters Penalty Tax Fund, wtrpf.org) if and when the IRS takes the money and the mounting interest and penalties.

The biggest challenge is that the accrued interest and penalties will substantially increase what the IRS says I owe. While there are ways to protect your assets (living below the poverty line is an option for me), most likely the IRS at some point way in the future will get what they demand if the law isn’t changed to honor tax conscientious objection. I’ve thought about that a lot — I resist and the war gets more money. However, this is more than civil disobedience for me; it is a moral issue for me. I have worked and advocated for peace for many years, so how can I actively support the war machine?

I will be supporting the 2016 Days of War Tax Action, Invest in People, Divest from the Pentagon, here in San Diego, intersecting with Occupy, Black Lives Matter, climate action, the homelessness coalition and the Fight for $15.