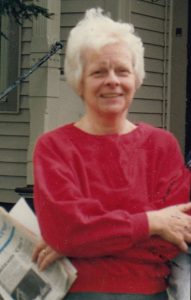 A bit of history: On November 4, 1977, Islamic revolutionaries in Iran stormed the U.S. Embassy, launching the hostage crisis. On February 1, 1979, Ayatollah Khomeini became Iran’s premier. The deposed Shah bargained for asylum around Europe, the Mideast and Africa into the summer, when President Carter admitted him to the U.S.

In April 1979, two things happened: The U.S. broke off diplomatic relations with Iran. And, friends who just happened to be visiting a Navy Fleet massed in Miami witnessed what looked to be a decontamination drill on board one of the vessels. I jumped to the conclusion that Carter was about to solve the hostage crisis by attacking Iran.

Tax Day 1979 fell on Easter Sunday. My 1040 was calculated, ready to send. I’m not a devout anything. Suddenly I couldn’t write that check. Instead I dashed off a note saying in effect “No more war,” and enclosed that.

Carter didn’t send the Navy. I still believe it was a close call.

The IRS dunned me for a year, then garnisheed my wages (down to about $100) for three months. I kept on writing those notes. I was lucky: other people who wrote refusals on their 1040s during the Reagan years were slapped with heavy fines.

The next IRS levies were on bank accounts. I learned major banks also charge for IRS levies: $100 for a $300+ payment in HSBC’s case. I found a bank that doesn’t do that and switched.

Some funny things happened. In one telephone exchange with the IRS my contact said, “I don’t understand why you don’t just send in the check.” “Oh no,” I said, “you’ve got to come and get it.” She laughed. One year the IRS sent me a check for $800 in overpayment. I deposited it, but two months later got honest and reported it must be their mistake. “You’re right,” they admitted, “$800 please.”

I was audited in 1985 and was cleared, though the assessor discovered I was entering property taxes in two places. Another penalty.

For several years I managed to owe nothing, but when my retirement kicked in I was back to owing again. I work hard on donations, subsidize rent to tenants (Schedule E), published two unprofitable novels (Schedule C). All my investments now are in municipal bonds (tax free) and/or development banks. The IRS has twice paid themselves back out of my Social Security payments. I’ve owed anywhere from $120 to $350 for every year since 2012, so they keep dunning me. Yet, except for the Social Security deductions, they haven’t tried other ways to collect. I can’t help appreciating the civility they’ve shown me, despite what must be a big flag on my social security number.

Incidentally the New York Times Sunday Magazine that Easter, April 15, 1979, carried Joseph Campbell’s article, Earthrise: The Dawning of a New Spiritual Awareness. If you haven’t read it, go look it up.

Margaret Weitzmann lives in upstate New York and worked as a librarian while raising four children (“all radicals in different ways”). Her two sci-fi books, Down Jacket and A Door at Aulis might still be found online or at your local library.