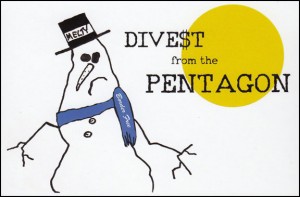 People are talking more and more about abolishing war and redirecting the mis-invested wealth into renewable energy, healthcare, bioremediation, public transit, etc. We need vast resources to address (embrace?) this climate-change-framed historical moment. As it happens, vast financial wealth has been and is currently being created by short-sighted, omnicidal industries. Perhaps this second vastness could cover the first.

Consider the following from Naomi Klein’s This Changes Everything: Capitalism vs. The Climate:

“The US military is by some accounts the largest single consumer of petroleum in the world. In 2011, the Department of Defense released, at minimum, 56.6 million metric tons of CO2 equivalent into the atmosphere, more than the U.S.-based operations of ExxonMobil and Shell combined. So surely the arms companies should pay their share. The car companies have plenty to answer for too, as do the shipping industry and the airlines.”

Similarly, from her list (by no means complete) of options for “equitably coming up with the cash to prepare for the coming storms while radically lowering our emissions to prevent catastrophic warming”:

“Slashing the military budgets of each of the top ten military spenders by 25 percent could free up another $325 billion.”

The 2015 U.S. “Defense” budget was $1.3 trillion, according to the War Resisters League pie chart. 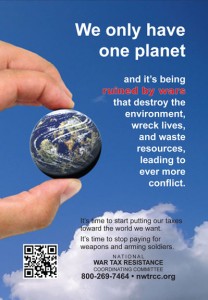 Do you want to divest from the Pentagon? Get started with war tax resistance and spread the word!

Other great media on the link between the military-industrial complex and climate change/environmental issues: