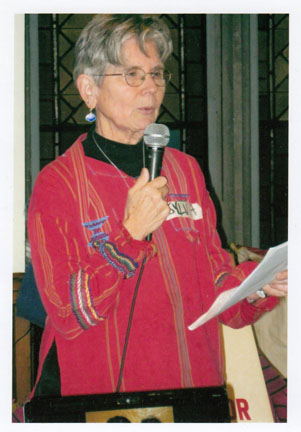 In 2014 my taxable income was $11,826 and I got a $41 refund. Too bad! I would like to have withheld some taxes to protest money used for wars and drone killings and budget cuts for education, health care, and environmental protection. I can no longer concentrate my protests only on military spending. These other issues are just as important and are, of course, related.

But can you believe that I once supported the Viet Nam War? That I actually believed in the “domino theory” and was a Rockefeller Republican? The pastor of my Presbyterian Church and his wife changed all that—thank goodness—as they took courageous stands against the war and racism.

As my indignation rose with my education, I took my first timid steps in tax resistance by withholding the federal part of my telephone tax. It felt scary but there were no consequences that I know of.

As the war raged, I heard about people withholding money from their federal tax returns. It gave me a lot of satisfaction to withhold small amounts and to write about my opposition all over the tax form. I also claimed additional allowances on my W-4 so I would owe more taxes at filing time. I kept increasing my tax refusal even though I accumulated interest and penalties, which the IRS sooner or later seized from my savings account or salary. I know some people were able to hide their assets, but I was a single mother with a salaried job and could not figure out a way to do that.

After 1983 when the IRS decided our protests were frivolous (FRIVOLOUS!) I stopped writing on the tax form. I did include a separate letter stating why I was not paying all the taxes that I owed but did not want to risk fines.

As the Viet Nam War was coming to a close, I turned to my Pennsylvania state tax return. The death penalty was reinstituted here in 1973 and was being used, so I started to withhold money from my state tax return. I also protested the death penalty at the District Attorney’s office in Philadelphia and spent a week in county jail in 1998 for blocking the doors with four other activists.

During the first Gulf War in 1991, I was working in Nicaragua as a volunteer nurse practitioner. Many of us protested by fasting to call attention to the criminality of that action. I was way under the taxable income then, but when I returned to the U.S., I began to have a decent income again.

Come the wars in Afghanistan and Iraq, we protested at the Federal Building in Philadelphia by the hundreds. Many of us spent a week in federal prison as we refused to pay the fines. I also began my tax resistance again to protest all the tax dollars used for killing and wars. Again the IRS eventually seized my assets to pay the tax, interest, and penalties. I was able to afford that but have always contributed to the War Tax Resisters Penalty Fund to help out resisters who owe more than they can afford to lose.

I wonder sometimes “does it do any good?” But the option of paying taxes without protest or question does not feel good. And tax resistance is but one strategy that we need to use to work for peace and justice in our country and the world.

Sylvia Metzler lives in Philadelphia and is active with many groups including WILPF, Health Care for All PA, Brandywine Peace Community, Medicines for Nicaragua, and Food and Water Watch.