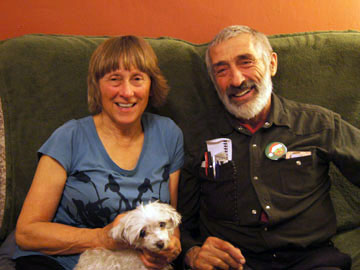 Peter and Mary live in Colorado Springs and are part of the Bijou Community, which is an intentional, faith-based community working for nonviolence and social justice.

They met when Peter was in graduate school at a Mennonite Seminary in Indiana, and Mary was working with a county home for indigent people. They married, lived in Canada near Peter’s family for six months, then set about looking for a community that combined their desire to work with poor people and with peace­making. “We see those as so connected. War im­poverishes the earth and impoverishes people. It’s just so antithetical to what makes for peace.” They found a small group of kindred spirits in Colorado Springs and have been there since 1979.

War tax resistance came straight out of the Bible for Peter. At age 18 while in theology school in Canada, he attended a conference on the military-industrial-complex. “I learned about the number of people in the military, but even more, about the commitment in terms of capital, guns, war machinery, and all the bucks that are made from war both in Canada and the U.S.” When it came to what belongs to Caesar and what belongs to God, as an anarchist he felt Caesar was causing the problems. “My work against this had to include tax dollars — more than just phys­ically refusing to give my body to war.”

After college, Mary was living with a couple of friends, and one of them suggested resisting the phone tax, a new concept for Mary. Their refusal led to a meeting with the IRS, during which the agents noted that the women were not alone. “They were kind of admitting that it was maybe a movement, so my roommate was really excited after that meeting.”

Members of the Bijou Community were already involved in war tax resistance when Peter and Mary arrived. Early on, money was held in common, but that evolved over the years to each doing their own thing. One year the community did a tax protest and filed a 1040 saying they didn’t want to pay anything “because we don’t want to support the war.” That seemed to trigger an audit, which took an exhausting six months of collecting receipts to convince the IRS that members were not living off donations that came in for the soup kitchen and houses of hospitality. “The IRS said don’t file like that anymore because it messes up our system, and we said don’t audit us anymore because it messes up ours!”

Living on a low income is challenging, but community makes it possible. “We share cars, laundry, food, gardening, clothing,” says Peter. “I have a bike with a trailer and arranged with a health food store to pick up food once or twice a week that they would otherwise discard. The good food we share with community members, and some goes to compost. I also pick up wood pallets (untreated) that we can use as firewood from a business that would put them in the trash.”

While they don’t live in communal housing now, one thing that came out of the community work over the years is a land trust with housing for low income rentals. Peter and Mary live in this housing, which is open to anyone in need as vacancies arise.

Peter says, “The lifestyle matter is really paramount, to try to learn what our needs are and where they are being distorted by the fatal consumerist conditioning. We have always tried to discern carefully and lovingly so that together we can hopefully live on a more globally sustainable standard of income.”

Mary adds, “It’s that Quaker thing about live simply so that others can simply live. In that sense low income war tax resistance is part of the bigger philosophy. We already have such huge footprints on the planet that we should make them a little smaller.”

It’s not without its complications though. In looking for ways to earn money, Mary has had a variety of traditional jobs that involve tax reporting. “I was just not skilled at painting or landscaping or the things that people could do under the table. Sometimes employers want to give you more or less hours, so it affects your choices. You always need to see how much you are going to make and not make too much.”

Also community members are aging and dealing with further limitations in ability to work or lack of qualifications for Social Security. “When you’re 30 years old you don’t think about aging issues, but now we do!” says Mary. “It may be one discussion our community didn’t have in very much depth when we were all younger and that could have been helpful. I don’t know that it would change things a lot as far as how it ended up anyway, but maybe I would have felt less ignorant or less surprised when I started looking into how to apply for Social Security and Medicare.” Peter added, “We may need a more careful discernment of how we are doing as a community sparked by the different needs of an aging people, as we continue to care deeply for each other.”

Bijou Community is in a military town. Colorado Springs is home to (or near) the U.S. Air Force Academy, Peterson Air Force Base, Fort Carson, and Schriever Air Force Base. Bijou Community members have done hundreds of actions over the years at the bases, and they “banner” every week at busy downtown intersections. “We get a lot of chances to talk to soldiers and military supporters about why we are out there,” says Peter. “At least they hear about another way of thinking.”

Despite all her activism, Mary says she sometimes feels guilty about not broadcasting her war tax resistance. Hearing a discussion at a NWTRCC gathering about “how public are you” made her wonder about this. “It’s not like I don’t talk about it if it comes up, but I haven’t been advertising it. Would I get into trouble if I was more public? I think the emphasis on redirection is good. The naysayers see that you are putting the money somewhere — not wanting to be an anti-tax person.”

“We don’t have much to be proud of as long as we still have war. We sure wish we could light fires more successfully under individual’s bellies, but we persevere and try to find more creative ways of doing this,” says Peter. “Living with kindred spirits — there’s a lot of strength. It’s battery charging for one’s own life and vision verification. We have no excuse to be burned out!”