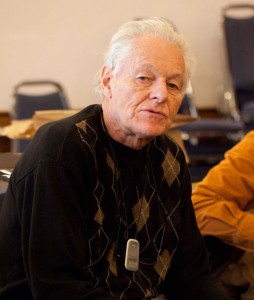 I was moved by Bill Ramsey’s eloquent article “Redirection: Our Constructive Program” (MTAP, June 2013) to recount a bit of history.

It was back in 1958. I had been powerfully influenced by my participation in activities of Peacemakers and was ready to begin my witness as a WTR. I had met and married my dear German wife, Marlies, in 1953 while doing Alternative Service (Korean War) at the self-help housing project/AFSC workcamp at Flanner House in Indianapolis, Indiana.

It needs to be said that Marlies had endured, and survived, living in Germany all during WWⅡ. As she recounted her harrowing experiences to me, for the first time I was gaining an up-close-and-personal understanding of the true nature of war. Her insights contributed profoundly to the development of my lifelong grounding in nonviolent peace and justice activism.

In our discussions about the wisdom and implications of WTR, she was the first to insist that we should not keep the refused money, but put it to good use somewhere. Nudged by my intensive study of Gandhian nonviolence, I immediately perceived that here was a “constructive programme” that made eminent moral sense. It would be the resounding “YES” that we needed to shout as we voiced our emphatic “NO” to war.

So began our WTR. I was the sole breadwinner. Influenced by Peacemakers, I decided to be a nonfiler and persisted in this for the first decade of my resistance, until I went into U.S. Tax Court in 1972 and then began filing “zero-liability” tax returns. But I am getting ahead of my story.

(Since Marlies was a resident alien — she had no desire to become a U.S. citizen — she soon decided that she would not continue as a WTR, risking deportation. So all during our married life, when she was earning regularly and regretfully paying taxes to IRS, we filed separate returns.)

By 1960, I was psychologically prepared to communicate with the Commissioner of Internal Revenue. I wrote a four-page letter and sent copies to President Eisenhower, my congressman and senators, and other government officials. In this document I decried the militarization of the country, the pernicious impact of the cold war arms race, especially with WMD. But in addition to this boilerplate, I spelled out clearly the nature and origin of my “alternative peace tax.” I pledged my determination to make it a part of my future relationship to IRS, unless the Commissioner would assure me that all of any tax I might pay would be used exclusively for non-military purposes.

Now we come to my 1973 case before the U.S. Tax Court in Philadelphia, the very first such case in the nation protesting the Vietnam War. I was active with the new WTR group Philadelphia War Tax Resistance (PWTR), sparked by Wally and Juanita Nelson. A Philadelphia lawyer, John Egnal, was also a member, and he encouraged me to take my WTR witness into Tax Court.

Jack Malinowski, a Quaker working with AFSC and a WTR, volunteered to spread the word to the WTR movement nationwide. To make a long story shorter, and to come back to the nub of this essay, one of the documents submitted to the Tax Court in support of my plea was my four-page letter spelling out my plan to engage in what we now call “redirection” of refused taxes. Jack mailed it to upwards of 700 WTR contacts around the country, spreading the idea far and wide.

So, in summary, I think it is fair to say that the essence and origins of the very widespread practice today of WTRs conscientiously redirecting their refused taxes into channels of constructive activism, community building, and addressing human needs, can be traced to 1958. It was then, arising from the moral insights and integrity of a German woman, Marlies Neuerburg Harper (who died in 2003, may we honor her spirit), scarred by war and devoted to peace, coupled with the passion of her American husband, determined to devote his life to renouncing all war and using his resources, including his taxes, to create conditions for peace, that the first ripples of the redirection movement for WTR began to spread out.

My hat is now off to Bill Ramsey for his article in this newsletter and all the war tax resisting/redirecting folks who are doing so much — Gandhi-style — to “be the change we want to see in the world.”

Robin Harper lives in Wallingford, Pennsylvania. He wrote this July 4, 2013, but forgot to submit it until now — coincidentally a perfect time to get thinking about what to do with those resisted tax dollars.