An interview with Jack Herbert by Ruth Benn 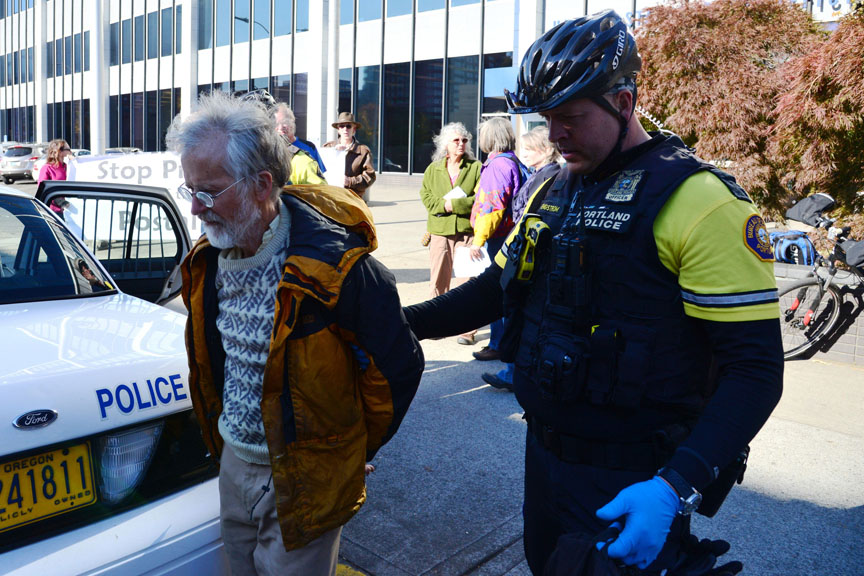 One thing about dealing with the IRS, it is time consuming. Our network probably needs an award to individuals for hours spent calling, writing, and waiting on the IRS. Jack Herbert in Oregon would be right up there among the nominees. At least his case has a happy ending.

Jack learned about war tax resistance back in the early 1980s through Quaker Quarterly meetings in his region. He met John and Pat Schwiebert and Ann and Bruce Huntwork, stalwart Portland peace activists and war tax resisters. For some years he didn’t have to file, but when he started working for the state in the 1990s, he would refuse to pay any tax owed at the end of the year beyond what was withheld. Most times the unpaid tax was seized, but remembering the targets of U.S. missiles and wanting to “raise a ruckus” kept him motivated.

In 2009 he got a warning that he might be charged with a frivolous filing penalty for sending a protest letter when he filed his 2008 1040 form. The IRS followed that up a few months later with the actual penalty of $5,000, and thus began Jack’s five-year saga.

There was a small miscalculation on his 1040, and the first IRS worker told him if he corrected his form the frivolous penalty would be lifted. He followed her instruction but the penalty was not lifted. He wrote letters to the frivolous office in Ogden, Utah, to no avail. Being somewhat uncollectible he did not respond to collection notices, but after a year or so the IRS managed to levy and seize about $1,500.

By 2010, the NWTRCC office put Jack in touch with our legal advisor Peter Goldberger. At that point the IRS said “pay the fine or you can’t appeal.” Jack paid the balance, and he and Peter pressed along with the next step of filing a Form 843 requesting a refund.

In 2013 Peter noted, “I filed a timely appeal from the denial of his refund request on May 2, 2012. I have proof of FedEx delivery to the Appeals Office in Ogden, but never received so much as an acknowledgment of the appeal much less a ruling. I renewed the appeal on July 16, 2012, because they sent him a second denial of the same refund request. Again, no acknowledgment or ruling in more than a year.”

In 2011 a NWTRCC activist filed a complaint online to the Taxpayer Advocate (TA) Service questioning this application of the frivolous penalty as a systemic problem within the IRS. We’ve written about that in previous issues, but finally in May 2013 the investigator working on the case agreed with us. In August 2013 a memo was issued by the Office of Chief Counsel of the IRS clarifying that sending a letter with a return filed in good faith should not result in a frivolous filing penalty.

This ruling added fuel to Jack and Peter’s fire. The TA investigator told Jack to talk to his local Advocate office, and Peter says “that office finally came through for us.” The local TA office’s intervention with the Utah folks finally surfaced the formal appeal that had been sitting without action, or even formal acknowledgment, for over a year by then.

It still took six months, but on March 12, 2014, a check arrived in Jack’s mailbox covering the $5,000 penalty plus interest and penalties. Hooray!

What is Jack thinking about now that this fight is over? “The government should be required to respond. There should be a time limit or they’ll stall forever,” he says. But he would like to find ways to force the issues that our resistance is really about — the right to refuse to pay for war. He feels more motivated to be public in his protests as he remembers one of his first actions where the pictures of a Russian child — target of an MX missile — was pasted to the back of a check made out to the IRS. At that action a Marine officer passing by thanked Jack and the others for being out there.