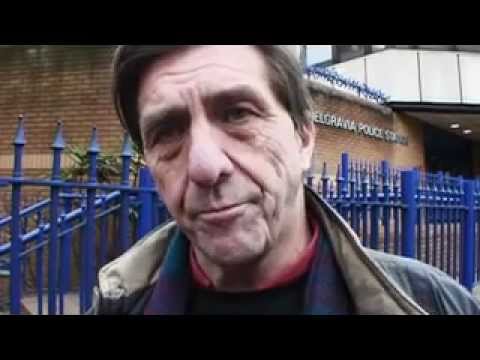 Recently Peace News and The Picket Line have posted about Chris Coverdale, a war tax resister in the UK who refused to pay his council tax, totaling approximately £1,800, and was sentenced to 42 days in jail. Coverdale argues that paying council tax would support government-sponsored terrorism in the form of war. He has been refusing to pay taxes for several years.

[More about the council tax: It’s a locally collected tax, similar to US property taxes. These taxes are collected for local use by the district (usually just called “council”) but may also be allocated to other authorities, also locally based. Read more about council tax on Wikipedia.]

Chris Coverdale said, “I have never refused to pay tax but I am refusing to commit an illegal act: to hand over money for the purpose of terrorist actions.” However, according to the Rye and Battle Observer, “Coverdale’s argument that council tax funds terrorist actions had been deemed ‘without merit’ by the High Court and the Court of Appeal.” (Read Coverdale’s June 2014 argument to the Court of Appeal here.)

I have been involved with Stop the War Coalition, and what they achieved in February 2003, getting a million people out on the streets of London, was a fantastic achievement, and there were so many people really keen to stop what was going on. But they have focused entirely on marching, demonstrating and protesting. And it’s rather like a group of people standing at a railway crossing, shouting at the train to stop, you know, you just know, it has absolutely no effect whatsoever. And if you do it over and over and over again, never having any effect at all, everybody’s just going to go, oh well, that’s a waste of time, this. And that’s really why we have to take a different approach. We must start to go down the legal route, the financial route, the political route, rather than marching… which really has no effect on government policy.

As of November 4, 2015, he has 14 days left to serve. You can write to Chris in jail (although due to international mail delays you should probably send a letter in the next couple of days). Here are the latest instructions from a Facebook group for supporters (Facebook log-in required to view group):

Chris Coverdale is in Lewes Prison.
His prison number is A1279DP. You need this to make contact. Also have P.N. A1279DP on each bit of paper sent into Chris not just on envelope.
HMP Lewes
1 Brighton Road
Lewes
East Sussex
BN7 1EA