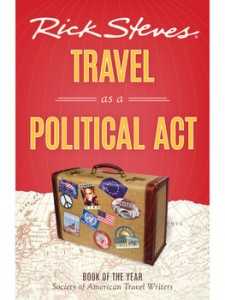 In addition to his specialty helping US residents learn the ins and outs of traveling in Europe, he has traveled around the world, including to El Salvador, Israel, Palestine, and Iran. He has a particular concern for building human understanding and peace that is well expressed throughout his book.

Here is an actual letter I am mailing to Rick Steves on the subject of war tax resistance. If nothing else, I hope to raise our profile a little bit among someone who ought to be our ally in the struggle for a peaceful world.

I read and enjoyed your book Travel as a Political Act. I was particularly struck by your compassion for folks you met in countries like El Salvador, Iran, and Palestine. Empathy and understanding for those impacted by war sometimes seems in short supply.

I’m writing to you because I was really intrigued by what you wrote about the US as an empire, and the way US military spending impacts the world:

You could debate long and hard about whether the US is an empire. But in reality, what you and I think is irrelevant. The fact is, much of the world views us as an empire, and therefore, we’ll be treated as one. We might not literally claim other countries as part of our own territory. But only we can declare someone else’s natural resources on the far side of our planet ‘vital to our national security.’ When others look at us, rather than see a hardworking, freedom-loving policeman of the world, they see a nation with less than 5 percent of this planet’s people shelling out 40 percent of the world’s military spending, and maintaining military bases in 150 countries. (page 98)

I am a member of a network called the National War Tax Resistance Coordinating Committee (NWTRCC). We share your concern about the US’ military spending and how that spending gives the US an outsized influence over politics and people around the world. We also believe that it is the role of concerned people in the US to oppose that spending, in the interest of saving lives and building peace around the world.

I thought you might be interested in learning more about war tax resistance because you wrote this:

Some might brush off American military might by saying, “Well, that’s just the government.” We are our government. We cannot rest on the notion of the ‘innocent civilian.’ If I pay taxes, I am a combatant. Any bullet that fires or any bomb that drops—whether I agree with it or not—has my name on it. That’s simply honest, responsible citizenship. (page 98)

Mr. Steves, I agree with you wholeheartedly. We are not innocent. If we pay taxes, we are implicated. That is why NWTRCC supports people withdrawing their consent for bombs, bullets, tanks, and empire by refusing to pay some or all of their federal income taxes or other taxes that pay for war. Many refusers also redirect their tax dollars into community organizations and projects that support peace, justice, self-determination, and the environment.

I believe that such acts of civil disobedience are powerful statements for a better world and can, along with many other grassroots approaches, challenge US militarism and empire.

I know that you are already interested in boldly stating your support for peace and nonviolence:

My memories of friends stiff with shrapnel, and former parks filled with tombstones, push me toward pacifism. During times of saber-rattling, I fly a peace flag from my office building. A neighbor once asked if I knew how much business I’ve lost by flying that flag. Because of what I’ve learned about the human costs of war in places such as Bosnia-Herzegovina, El Salvador, and Iran, it hadn’t occurred to me to measure the economic costs to my business of speaking out for peace. In fact, it’s hard for me to understand how someone could support a war they didn’t believe in because it was good for their business. (page 255)

Again, we’re on the same page. When we speak out and act against militarism and for peace, we ought not to qualify our positions on the basis of whatever economic cost it might have to us. Our values and our consciences mean so much more than that.

Thank you for speaking out for peace.