There has been another mass murder shooting in Roseburg, Oregon.

A question stares us in the face.

Can we expect to endorse mass homicide on the wholesale level and successfully forbid or prevent it on the retail level?

As a thought experiment or moral reflection consider this. 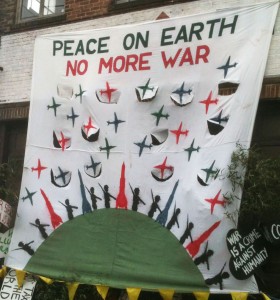 Since World War II our society has justified mass killing as a way to restrain evil and improve the world.  Most egregiously we have incinerated two Japanese cities and ever since touted MAD — Mutual Assured Destruction — as normal and sane.  Most of our best known Christian theologians and preachers have justified the possession and use of nuclear weapons and every new invention of  military hardware and the pursuit of global military domination.

The local paper never misses a chance to celebrate wars of the past and praise those who have killed human beings around the world in the name of one or another higher good.

The public, including our children, are supposed to think that all of this makes sense, is normal, rational and moral.

You could just as well produce a sane population by insisting that 2 + 2 does not equal 4.  Everybody consulting their own mind knows it is 4, just as everybody consulting their own conscience knows that killing people is morally degraded and degrading, but the culture, agreeing with the nation state, says it is not, so the individual tries to twist their own mind and conscience to agree with this distortion.

We are capable of doing immensely better than this, but where is the leadership to affirm the inherited sanity in all of us?