I runs this high-end chauffeur service, see, and gets this call. Lady on the other end of the line wants a ride across the border into Vermont. Can’t get much of an idea what kind of meeting she could possibly be attending up there in the back woods.

I pick her up and she’s just nice. I love her immediately with a conviction that makes no sense. She’s gracious, know what I mean. Beautiful.

When I get her there I start snooping around, see. Maybe it’s some kind of subversive organization. Maybe these people are taking advantage of this nice old lady.

I creep up to an open window where these people are meeting. There’s something fishy going on. 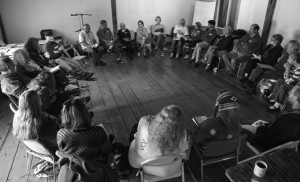 They’re talking about refusing to pay income tax. Some of them are even talking about taking the money they owe in income tax each year and giving it to some other cause — “worthy” they keep saying, like peace, poverty or to help someone in hardship.

This I can’t believe. Treason, it is for sure. Undermining the authority of the U.S. government in its sacred office of controlling every facet of our lives. Where do these people get off!

I put my ear up closer to the window and am surprised to hear them talking about how morally, ethically impossible it is for them to pay money into a fund that finances the horror of war, torture and the denial of certain inalienable human rights of its citizens.

I’m appalled, see, like any good American would be.

I become more convinced that this nice old lady has sadly come under the influence of some sinister cult. And I’m bound to save her from such perfidy.

I put my ear closer and am surprised to learn that my nice old lady isn’t acting like she’s being taken advantage of at all. In fact, I’d have to say she was carrying on like she’s one of the group’s ring-leaders — spurring the group on, as it were, to commit acts of civil disobedience.

I spy further and see that there’s something strange about all these other people. I hate to admit but they all seem, well nice. Big tough guy like me, all red white and blue, saying people talking treason are nice. Never happen!

But standing there spying through the window upon this meeting I get feeling like church. It’s not a church at all, mind you. There’s no steeple or anything. It’s just a feeling. Somehow I don’t feel so lonely and these people, they could be my brothers and sisters. I could give them all a hug.

Damn this is hard to admit!

So the meeting ends and I’m taking this nice old lady back across the border. I’m feeling good and babbling like an idiot about, I don’t know, life in general. She’s listening and saying words that are nice to hear like music. And instead of my saving this poor old lady from a cult, or driving her to the police station to get arrested for treason, I’m saying to myself, “I love this lady. I truly do.” 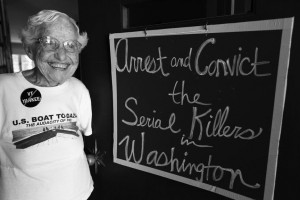 We get to her house and I’m letting her out of the car. As she’s walking away I say, “Hey, what’s your name anyway.”

Ralph Dolan lives in Easthampton, Massachusetts. He wrote this story in September 2013.

Everyone interested in war tax resistance is invited to the next New England Gathering, October 16-18, 2015, in Amherst, Massachusetts.