Even 5 years after its initial release, Death & Taxes is still relevant to anyone trying to become more involved in the peace movement. 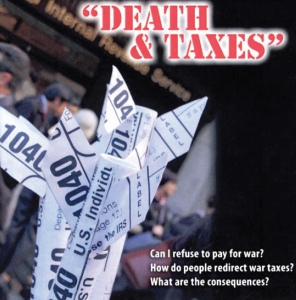 The film is a wonderful, light-hearted telling of the lives many war tax resisters have lived and how it doesn’t take much more than a belief to start protesting for peace. The men and women featured express their convictions about ending war with grace and firmness.

Although not much with military spending has changed since each began resisting, the group of war tax resisters is still strong. Their inspiration comes from the heart, from a commitment toward ideals and a dedication to holding themselves to a standard that requires discipline and courage.

Death & Taxes is proof that this belief and dedication to nonviolence still exists and will never end.

To seek peace we must not contradict ourselves. It is necessary, for all of us, to face fear of arrest, losing our homes, and any other threat in order to state to the United States governments and the governments of the world that paying for war is never acceptable. This film proves that you are not cheating out on paying your taxes by doing this, but you are simply living extra consciously and re-directing those taxes to organizations that truly fund the greater good and promote quality-of-life, rather than taking quantities of lives.

For anyone who struggles with paying for war, I recommend to them Death & Taxes. This film educates a person on how they too can live by ways of peaceful means, causing no harm to life on earth.