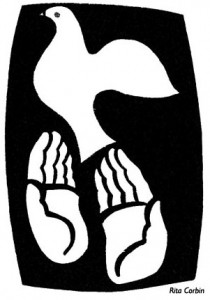 On hearing of Julian Bond’s death, I remembered we ran something in the NWTRCC newsletter ages ago where he mentioned a memory of tax resistance. So I looked it up:

“Rick Gaumer of WRL New England receives the alumni magazine from the University of Virginia. The Spring 2007 issue surprised him with this story from an interview with civil rights activist Julian Bond:

…he recalls attending a Quaker school in Atlanta*, where he was first impressed with the idea of aggressive but nonviolent resistance. “It was impressive to me because you’d meet these people who were tax resistors, who wouldn’t pay their income tax because the monies were used for war. I thought, My Lord! How can you not pay your income tax? Everybody pays their income tax. They’d said, ‘No. I’m not doing it,’ and they’d go to jail. I thought, You’d go to jail voluntarily? How could you do that? Of course, I later did it myself. But at the time it was like, Whoa.”  (August 2007, More Than A Paycheck) 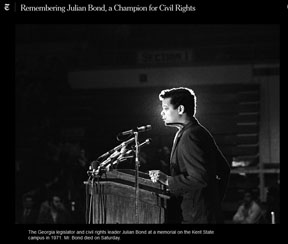 This is a moment to first emphasize that it is very rare to go to jail for war tax resistance. You can see the people who’ve been taken to court and some who were jailed related to war tax resistance on this page (33 who spent time in jail since 1942 if I counted correctly).

As far as I know, Julian Bond never became a war tax resister, but he was a lifelong resister of injustice and an activist, writer, poet, speaker, teacher, politician, leader for peace and real change. He did find it was easy to be jailed — for everything from lunch counter sit-ins when he was a college student to protesting the Vietnam War to tying himself to the White House fence to protest the Keystone XL pipeline in 2013.

Democracy Now! had a fine tribute to Bond on their August 17 show.

On the show Amy Goodman played this quote from 1967:

My position is that things that the United States does overseas are related to its behavior towards people inside the country and that there’s a relationship between what I consider our aggressive behavior in Vietnam and the treatment of minority groups inside the United States, that, taken separately, both are wrong, and taken together, they’re even wronger. I imagine that—or rather, I am of the opinion that our involvement in Vietnam is wrong, it’s illegal, it’s immoral, it’s un-Christian, it’s un-Buddhist, it’s un-Jewish, it’s un-Catholic; we ought not be there; we ought to disengage ourselves; and that there will never be decent treatment for minority peoples in this country until we begin to concentrate on freedom and justice and equality for those at home, and stop worrying about puppet dictatorships and despotic governments in Southeast Asia.

How many countries can we substitute for “Vietnam.”

I think I’ll go hunt up some Julian Bond writings and videos on the web and at the library. He inspires — and we can be proud that war tax resistance inspired him.

* I see a reference in his New York Times obituary that he attended the Quaker-run George School near Philadelphia, so this reference might not have been edited correctly.