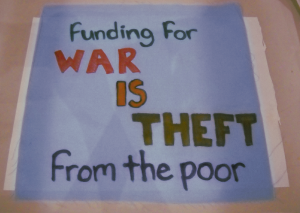 This year NWTRCC made a big push to get war tax resisters to the U.S. Social Forum in Philadelphia and San Jose.

Unlike the 2010 Social Forum in Detroit, which had 20,000 or more attendees, the forum in San Jose was very small. I heard estimates of attendance that were in the hundreds rather than thousands. It sounds like the Philly event might have been better attended, since there’s so much population density on the East Coast.

On the Thursday afternoon that I arrived, Anne and I went to see the San Jose Peace and Justice Center’s 1970s student poster exhibit at the LGBTQ youth center. 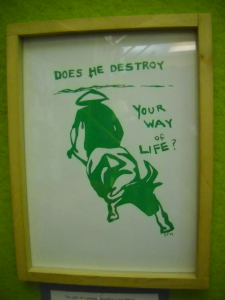 When we mentioned we were there to talk about war tax resistance, the person we talked to said that they hadn’t paid taxes this year! I gave them some information and my email address.

Our workshop on Friday was sparsely attended, with as many facilitators as attendees (3 participants, plus 1 person who came and talked to us extensively prior to the workshop). Because it was an early morning workshop and the venues for the event were far apart, meaning that people showed up late, we didn’t have time to do the kind of program we’d planned. But talking personally to people in a small group is probably a lot more effective.

One person who attended the workshop mentioned they had learned about tax resistance through the film Zeitgeist, which in part asserts that there’s no valid federal law mandating the payment of income taxes. We chatted a bit about that assertion and why I don’t think it matters whether the federal law is valid (David Gross matches my opinion on this issue here). 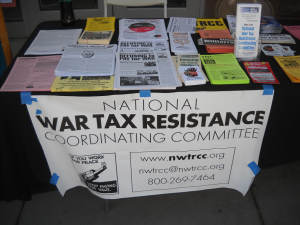 Our table was located outside the main building, the Washington United Youth Center. It was very hot in San Jose during the Social Forum, so this meant at least that our table was in no danger of rain. Unfortunately, the vast majority of workshops were not held at or near the youth center, so we didn’t get a lot of foot traffic. We did have some valuable conversations and gave out a lot of pie charts and flyers. Tabling was covered by me, Cathy Deppe, Anne Barron, and Steve Leeds.

Participating in the Social Forum

On Thursday night, Cathy, Anne, and I attended a plenary session on Alternative Economics and Cooperatives, organized by Human Agenda, one of the organizers of the Social Forum in San Jose. Executive Director Robert Hobbs walked us through Human Agenda’s theory of change and DECKS values: democracy, equality, cooperation, kindness, and sustainability. We talked about how cooperatives can embody those values, and resources for creating cooperatives. We also heard from Rosalinda Guillen, a leader of Community to Community Development, on farmworker organizing and how non-farmworkers can and should support their struggles.

I continue to be very interested in the possibilities of cooperatives, and creating cooperatives with a revolving loan fund. The only question is, how to build a revolving loan fund that is big enough to really provide needed money yet be able to absorb losses? Is this something war tax resisters could do through alternative funds? Human Agenda is doing another method of growing more co-ops. They are creating a landscaping cooperative called Smart Yards, and 25% of the “profits” will be used as seed money to fund another cooperative. That co-op will then use 25% of its “profits” to fund another, and so on.

A highlight of the weekend for me was the People’s Movement Assembly on militarization at home and abroad that I attended on Saturday afternoon. Organizers from BAYAN USA and Women for Genuine Security, among other organizations, discussed US militarization in Japan, Korea, and the Philippines. An organizer from Black Alliance for Just Immigration also spoke about militarization at home and some issues in current movements. The workshop was extremely well planned and facilitated, including some creative physical movement activities (like when we had to strike a pose that embodied some aspect of militarization).

During our small group discussion on the topic of how our disparate movements can connect better and work together, I spoke about war tax resistance. One attendee asked me if I thought that war tax resistance could be a major component of an anti-militarization movement. I had to answer that honestly we’re not anywhere near that point right now, but that I hoped that it could become a strong part of a revitalized movement. I also think it’s important that calls for “unity” in the anti-war movement recognize our many organizations’ individual strengths and focuses. This leads to the question, How can we maintain our work in the areas that are most important to each of us while advancing common goals?

Some big topics and not many answers. I appreciated the opportunities to learn during the Social Forum, but I also wondered how much fruitful action the conference was creating. Stay tuned to the blog for more reflections on the Social Forum from other attendees, coming soon.

One thought on “Inspiration for another world: the U.S. Social Forum in San Jose”