I recognize the utility of this move, especially for talking to people who are not even all the way there yet with us on opposing war. Getting people to agree that the military budget is too large is one possible first step. Even the WRL pie chart is aimed at getting people to come to that conclusion, showing people that much more money than they probably think goes to the military budget. (See Ed Hedemann’s discussion on this point.)

NWTRCC isn’t positioned to take a stance on what amount of the military budget we’d want to aim for. It’s my impression that the vast majority of our network would resist the government putting any tax money toward war.

Arguably, getting people to reject militarism altogether is a big step. At least at the beginning of my anti-war reasoning, I wouldn’t have agreed with the statement that we needed to abolish militaries entirely. I would have argued that the Afghanistan and then Iraq wars weren’t based on actual threats to the United States, and that it was poorly argued that military force could achieve the ends the US government was looking for. Seeing calls for reducing the military budget led me to further evaluation of the evidence for wars, and over time, I came to believe that all wars start in similar ways, with similar justifications, and they start with promises that peace will reign but only after we wage this war. In my case, eventual complete opposition to war was a foregone conclusion.

But who are we trying to convince: those who are ready to contemplate reduced military spending, if not abolition? Or people who are already entirely anti-war and ready to take a stand? I believe that any movement needs a variety of approaches and arguments to meet people wherever they’re at and help them get started. I also wonder which approaches are most effective at getting people to take radical action, like war tax resistance. Do we focus on budget numbers? Do we focus on ethics? Do we go for pragmatism or principle?

What do you think? 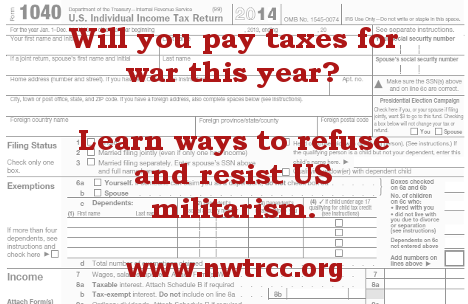