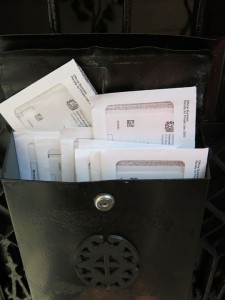 A few days ago I got a pile of envelopes in the mail from the IRS. Ten to be exact. All in one mail delivery. Each bill was dated September 2 (well ahead of that date), each for one tax year from 2003 to 2012.

I file and refuse to pay, and the IRS usually accepts my self-assessment per my 1040 form, so there’s a 10-year statute of limitations on collection. The IRS has 10 years to collect from the date of assessment, so if you file by April 15 the assessment might fall within a few weeks after that. It’s possible the IRS could ask for more time, but generally they keep to the 10 years.

Getting all those envelopes at once can be rather intimidating, and I guess that is the point. The IRS used to send out a bill showing the ten years on one list, in one envelope. The total was added up on one piece of paper. Now they send a bill for each year, which includes interest and penalties added to your principal, and you total it yourself.

Mine adds up to about $26,000 (about $8,000 interest and penalties on top of the principal). I’m very happy to see that one of the highest years just dropped off the list and is beyond collection, so my total is actually going down. This is mostly due to my downward mobility, but I can’t complain about that. I have plenty more than most people in the world.

Here and there the IRS has gotten a little money, once seizing $700 from a bank account, $100 or so when I overpaid state taxes and had a refund that the Feds took, or the tax rebates that “reduce my debt” rather than arriving as a check in my mailbox.

Since 1987, if I’ve done my calculations correctly according to the War Resisters League pie chart, the income tax money I’ve kept away from the government is about equal to one second of today’s Pentagon spending. If you want to count your success with war tax resistance in how many weapons you’ve stopped them from building, uh, well….

But I believe in individual responsibility and resistance to war in the many forms it takes, even if it is hard to see results in terms of policy change. And I believe in refusing to pay for war because it is the most direct connection I have to war.

People around the world experience directly what U.S. tax dollars are doing, whether living under Israeli occupation supported by billions in U.S. aid money, picking up a tear gas canister marked “Made in USA” in Egypt, or facing Apache attack helicopters sent to Indonesia by the U.S. and used against the population in West Papua.

Yes, U.S. foreign aid can do some good things, but I can also give directly to projects that use all my donation for good things rather than half of it going to the military, war, and killing.

So IRS, don’t ignore me. Keep sending your envelopes. They might be a little scary, but in the end they remind me of why I do what I do and that my resistance to war is added to that of thousands of others. We shall overcome one day.